Some churches and mosques have been sealed off by the Lagos State government over environment pollution. 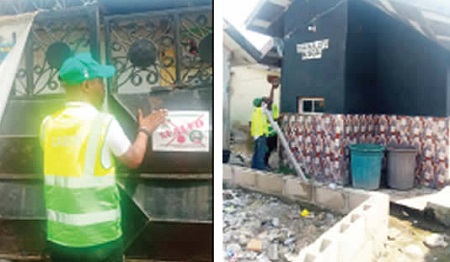 The churches and mosques were closed up

Punch Metro reports that the Lagos State Environmental Protection Agency on Saturday closed eight places of worship in different parts of the state over persistent environmental pollution and disruption of peaceful co-existence of the residents.

The General Manager, LASEPA, Dolapo Fasawe, who noted that the clampdown was to mark the World Tolerance Day, said the mutual respect of views, cultures and religions, which the celebration symbolised across the world, must be adhered to by all residents of the state, especially religious organisations.

“The state government recognises the fact that the state thrives on peaceful co-existence among practitioners of the major religions across the state, but of great concern to the state government is the need for religious activities to be conducted in a manner that worshippers and citizens will not infringe on each others’ rights,” she said.

Fasawe assured residents of the state that all recalcitrant organisations and worship centres known for disturbance would face the full wrath of the law, adding that owners of all unauthorised and illegally converted residential properties to places of worship without recourse to the well-being of other residents would also be made to face the law.

She, however, added that the owners of the sealed facilities would have to reach an agreement of compliance with the agency and also satisfy other conditions prescribed by LASEPA before the facilities would be reopened, noting that any owner, who open the shut facilities without the agency’s permission, would face the law.