A tanker which was laden with aviation fuel has fallen over on the Otedola bridge, spilling its content. 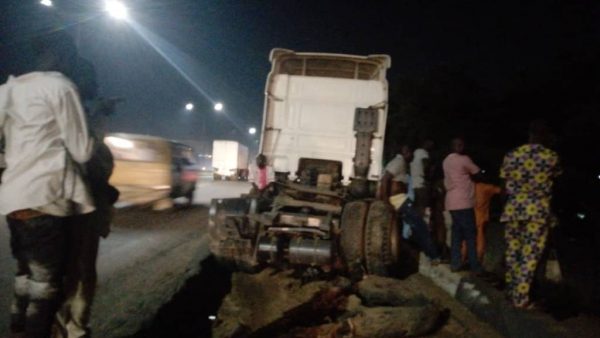 According to a report by Daily Trust, an oil tanker laden with 44,000 litres of Aviation fuel (Jet A1) was in the early hours of today involved in a lone accident on the Otedola Bridge inward Berger with the tanker spilling its content.

Emergency response is however ongoing to recover the tanker, according to the Lagos State Emergency Management Agency (LASEMA).

LASEMA team’s preliminary investigations revealed that the fully loaded oil tanker with registration number EKY 814 XX, lost its cargo in the lone accident due to over speeding and reckless driving on the part of the tanker driver.

It was learnt that the cargo containing the fuel detached from the truck head, fell on its side before it started spilling its content from the torn portions of the tanker that impacted the ground.

However, no injuries, fatalities or deaths were recorded in the oil spillage caused by the fallen tanker. 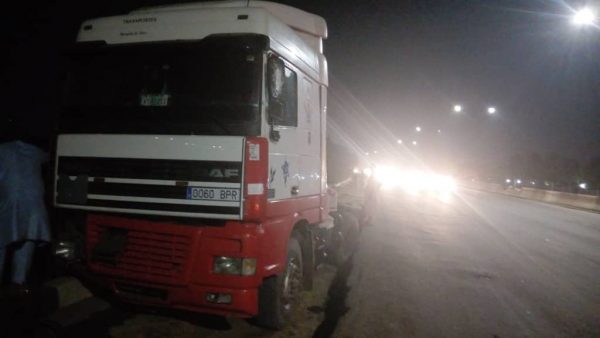 He said the impact of the spillage was minimized due to sustained activities of the LASEMA team and men of the state Fire Service.

“The very real danger of fuel ignition, explosion and fire, was fully averted due to the timely intervention, activities and collaborative efforts of LASEMA and the LASG Fire Service teams that doused the gushing flow of fuel from its oil spilling source, averting any probable ignition during its journey through gutters and drains to the canal,” Okunbor said.

He added that though the spilled fuel had been doused and blanketed, the LASEMA response team as well as that of the Lagos State Fire Service remains on ground to foil any “probable hazard which may result from trans loading of remnant fuel or recovery of the truck head from the deep gorge where it has fallen.”

Speaking on the incident, the DG/CEO of LASEMA, Dr. Olufemi Oke–Osanyintolu said the operation was quietly achieved with virtually no disruption of traffic around the ever busy Ojodu-Berger section of the Lagos-Ibadan expressway.

He attributed the smooth operations to the short response time of his teams whom he said were very capable and excellent team workers that coordinate and collaborate well with other emergency responders at incident scenes.