The Story Of Hussaina, A Young Aspiring Lawyer Who Died With A Toddler After Being Hit By Army Truck


The story has been told of Hussaina Baffa, an aspiring lawyer who died after being hit by an army truck. 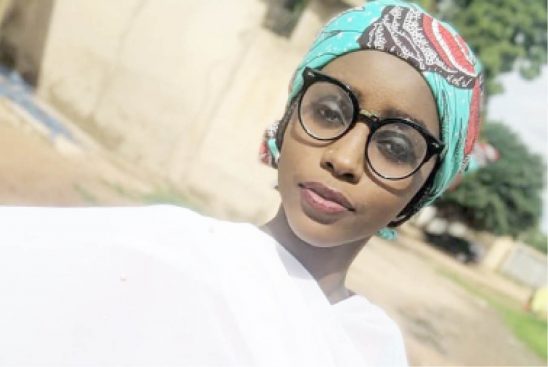 Last week, a lady – Hussaina Baffa and a toddler lost their lives in an accident involving a military vehicle and a tricycle, popularly called Keke Napep at Gwange Junction in Damaturu. The military vehicle was said to have rammed into the tricycle loaded with passengers.

Fatsuma Ismail is the mother of the late Hussaina Baffa, fondly called ‘Aunty Baby’ by family members. When Daily Trust on Sunday caught up with her, she sat next to the aged granny of the deceased, both looking forlorn. Nineteen-year-old Hussaina died on her way back from visiting her grandmother.

Talking about her late daughter, Fatsuma said, “Aunty Baby was an introvert; she always liked staying at home. You hardly see her mingling with people because she was the in-door type. She’d never fought with her relations or anyone at all. Sometimes, we may have visitors and she wouldn’t come out until they ask of her.

“From childhood, she had aspired to be a lawyer and we had been giving her the necessary support within our limited resources. She was a Pre-ND student at the Federal Polytechnic Damaturu. She started recently, and there are plans for her to secure admission to the university to study the course of her choice,” she added. 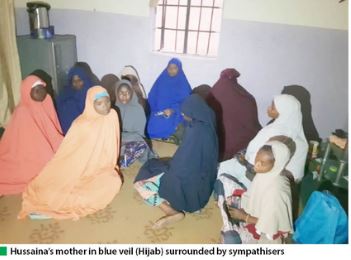 On how she learnt about the incident, she said “I was sitting in my room when one of her aunties came in looking extremely worried. She informed me that ‘Aunty Baby’ and a cousin had an accident, that they were crushed by an army vehicle. I asked about their condition and she told me that Hafsat had regained consciousness but my daughter was in coma. I became distressed immediately and we made arrangements to go to the hospital.

“On arriving at the hospital, I found her unconscious. Her cousin who was also involved in the accident kept asking if she was okay. The doctor assured us that she was okay and asleep. At that point, I resorted to prayers. After a while, I was called that she was vomiting intermittently. I got there but couldn’t render any help.  Some military men were taking pictures and doing some investigation.

“We were later referred to the Teaching Hospital, with her relatives running up and down to render one assistance or the other. I was with her until about 1pm when she started experiencing difficulty in breathing. Few hours later, we lost her.

“There is no word to explain how I felt seeing my daughter dying, but as believers we attribute her death to destiny,” the mother sobbed.

One of the late Hussaina’s relatives, Mustapha Musa, who spoke on behalf of her father, described her death as painful. He said, “this was a girl who lived so calmly and simply, she was always either at home or in school. Her father relied on her and pledged to spend all he had in giving her the best education. 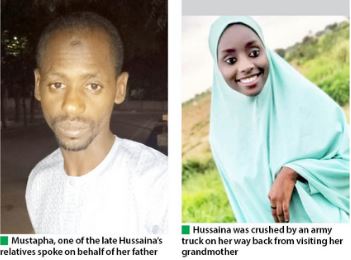 “When I learnt that she had an accident, I quickly joined them in the hospital where I met her unconscious. The doctors said she had a fracture, but eventually, she started vomiting through the nose and mouth. Her blood pressure initially went low and later shot up before we were referred to the Teaching Hospital,” he explained.

“At the Teaching Hospital, a CT scan was recommended and we had to contribute N28,000 required for it because at that point her father was financially exhausted.

“I was in the hospital till quarter past 12 but Hussaina remained unconscious. I got the tragic news of her death the following morning.

“Later, military personnel in convoy of about five vehicles came to condole and sympathize with us. They brought 5 bags of rice and cash of N100,000. We are not ungrateful, but the least we expected is her ‘Diyya’ (blood money) or financial compensation for the family, as enshrined in the Holy book.”

Mustapha urged the government and security agencies to caution their drivers against reckless driving.