Mountain Of Death: How '20 Villagers' Were Killed After Trying To Farm On A Mountain In Taraba


As many as 20 villagers have been reportedly killed after trying to farm on a mountain in a Taraba community. 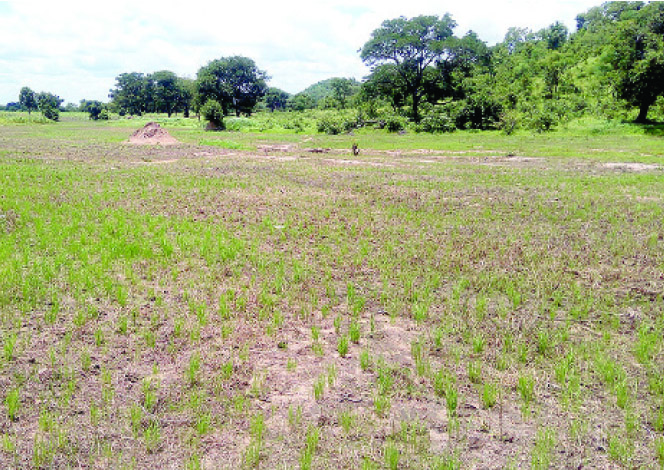 At every point in human history, nature has a way of spinning surprises, sometimes pleasant, at other times, less pleasant or out rightly unpleasant to man.

For the people of Ganga Balassa in Karim Lamido Local Government Area of Taraba State, one of such surprises that inspired a certain measure of displeasure is a mountain lying face-up in the heart of the community. Villagers said the mountain, often described as a “mountain of death,” has remained nothing but an awe-inspiring mystery. It has been credited with the deaths of 20 persons, who dared to farm on it at different times in the past.

Indeed, tales of its awesome, supernatural powers are commonly told from generations to generations with feverish flavor, resulting that even everybody, including children yet of age approach the mountain with utter care, caution and fear.

Spread like a blanket sheet across a landmass of 6,620 square km, it is not surprising that the mountain has been dubbed a “no-go-area.” Timothy Dankamata has lived in the town for a better part of his life. He whispered to Daily Sun: “It is wisdom to stay away from the mountain. Anyone who attempts to farm on the mountain dies just before harvest.

“This mountain that you see behind me, no one farms there anymore. There have been several attempts in the past to cultivate the rich nutritious soil of the mountain, but such a farmer ended up dying just before the harvest season. No one has ever cultivated the mountain successfully. We don’t know why that is the case, since other mountains around us are rich fertile lands for agricultural activities and are cultivated without issues by the members of their community.”

Another resident of the village, James Audu, corroborated his narrative: “It is not something that just started today.  It has been handed down from one generation to another. No one dares to farm on that mountain because death penalty awaits anyone who tries it.

“The mountain issues the death sentence and executes it by its sole self. The only thing we do is to go there and get firewood and timber for our huts. But you cannot farm on the mountain. In recent history, no one has tried it because we are all well aware of the consequences.”

A resident who pleaded anonymity claimed that his great grandfather died farming on the mountain, adding that the stigma still hunts his family: “I remember that when I was small, some people treated us as if we were outcasts. So my father told us that it was because our great grandfather was stubborn and had farmed on the forbidden mountain, despite repeated warnings from his contemporaries.

“When it was time for harvest, he died mysteriously like others before him who had attempted farming there. That is why people used to treat us the way they did.

“As a Christian, I don’t believe in mysticism, but I respect the belief of the people. I don’t see how farming on a certain portion of land can cause death. It is scientifically baseless, and completely illogical.

“The good thing is that most people have even forgotten the history of the mountain and my family and so we are fully integrated into the community and no one looks at us differently. But I think it is time the mountain is demystified.”

There are several compelling narratives explaining the origin of the mystery of the mountain. A resident from a neighboring community, Garba Yulde, alleged that an innocent blood was shed on the mountain in the past: “That mountain is cursed. They will not tell you this, but they all know it is true.

“The story is that a farmer was murdered on the mountain just before harvest because he made a good yield. Just before harvest, a community member who was more influential claimed that he owned the mountain and wanted to take over the harvest by force. The community knew it was wrong but kept quiet. The feud continued until he was murdered in his farm.

“But before he died, he placed a curse on the mountain that no one will ever harvest anything on the mountain and that is how it has been Ever since. People have tried to farm on it in the past and all of them- not a single one- all of them died just before harvest.”

It is also believed that the mountain has been the abode of the gods of the community, making it disrespectful and abominable to engage in farming activities on a sacred soil where the community worships their gods.

“That mountain is where the deity of our people is kept. The secret of our community is kept on that mountain and so it is a sacred place. That is why people are not allowed to farm there, because they will disturb the gods.

“Besides, there is the tendency that in tilling the soil, one may mistakenly dig up certain things that should best remain hidden underground. That is why people are allowed to go and fetch firewood, but are not allowed to farm on the mountain.

“There is land everywhere for farming. I don’t see why people should be competing with the gods for their own small portion of land. The consequence is death and many people have paid that supreme price in the past,” explained another member of the community

Yusuf Muhammad, the Chief of Ganga Balassa and custodian of the people’s culture and values, affirmed that over 20 people had died of either snake bite and other mysterious circumstances because they were strong-hearted and had defied the code against farming on the mountain: “It is forbidden to farm or plant there. Even the surrounding lands don’t go as far as the edges of the mountain. You will die for sure, if you try.”

He noted that some researchers took samples from the mountain to study it in a bid to unravel the mystery behind the mountain: “The result was not made available to the community.”

Chairman of Karim Lamido LG, Mr. Idi Mali, was of the view that enormous mineral deposit on the mountain was responsible for the mystery: “I am looking at this from the scientific point of view. That it is because of the precious stones and other mineral deposits there that things like this are happening.

“I hope that someday, government would take a bold step to unravel the mystery of the mountain. I am sure that it would bring great joy to the people of this community. I know that once they discover the wealth of the mountain, my people will be the main beneficiaries.”