Many helpless Nigerians are suffering from kidney failure around the nation and are struggling to stay alive. 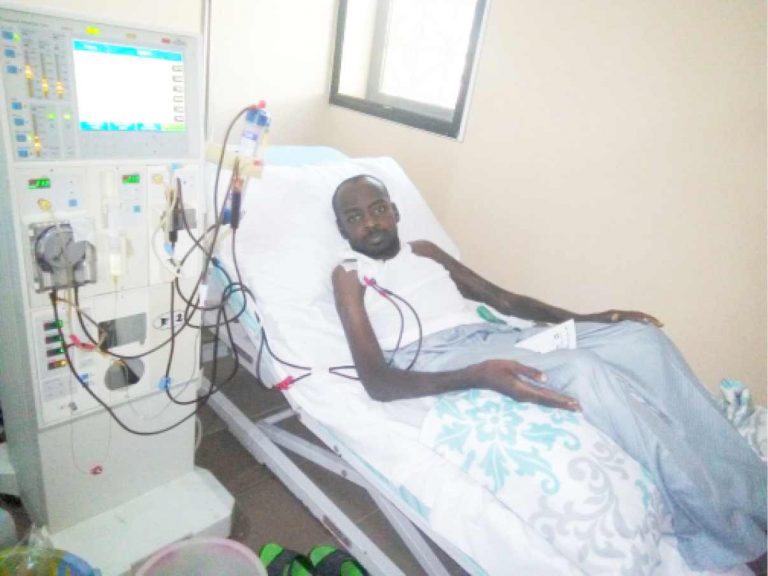 Anguish and dejection all over him, with red tubes planted on his chest, he lay on his back, gazing blankly at the instruments around him as his blood circulated through the dialysis machine back to his body. That was the 1,465th session of dialysis since Mahmoud Aminu Daneji, a onetime secondary school teacher with the Kano State Government, was diagnosed with a chronic kidney disease 18 years ago.

These long years of agony has robbed Daneji of happiness, even as he watches his chances of survival getting slimmer and dimmer every passing moment due to lack of money to secure kidney transplant outside the country.

He could not control his emotions as he recounted the sacrifices of his immediate family to sustain him for the past 18 years. He said that immediately he was diagnosed with the disease, he was placed on dialysis before he had his first kidney transplant in 2016, which unfortunately worked for only four years before it relapsed and failed again in 2010.

He said his family had sold everything, including houses, plots of lands and so many other things to sustain him through dialysis for the past 18.

“Just for me to survive, my family has lost everything. Even my wife had to leave, saying she could not cope with my condition,” he said.

Appealing to the Kano State Government and other well-meaning Nigerians to come to his aid, Daneji said, “We are discussing with one hospital in India, Apolo International Kidney Centre in New Delhi. They asked us to come with N15million for the medical procedure. But I don’t have money and I don’t know anybody to run to,”

He said five people had offered to donate the organ to him, four from his immediate family and one, a friend, adding, “They are all willingly waiting for me to go to India for the transplant.”

Reflecting on his experiences on dialysis for many years, Daneji said, “Over the last 18 years, the world seemed to have crumbled on me because of the pains and hardship this condition has subjected me to. Now, even if you promise me the whole of Kano, I cannot walk. Worst of it all, for all these years, I have been unable to pass urine. So you can see how important it is for me to undergo this dialysis; my life depends on it.”

According to experts, dialysis is his only option until he secures the organ transplant. So he has to undergo three sessions every week, irrespective of its health implications or financial burden on his immediate family.

A session of dialysis in public hospitals in Kano, according to findings, costs between N17,000 and N20,000. This implies that a patient suffering from chronic kidney disease will spend N60,000 for three sessions of dialysis every week, and N240,000 monthly, which translates to almost N3million in a year.

Daily Trust on Sunday learnt that the huge financial burden of managing the disease has forced many patients to resign to fate, waiting to die silently in pains.

At present, more than 10 patients who could not afford organ transplant turn to the Aminu Kano Teaching Hospital (AKTH) everyday for dialysis. And a substantial number of them belong to the low income class. This means that at some point they might not afford the recommended sessions of dialysis needed to sustain them. 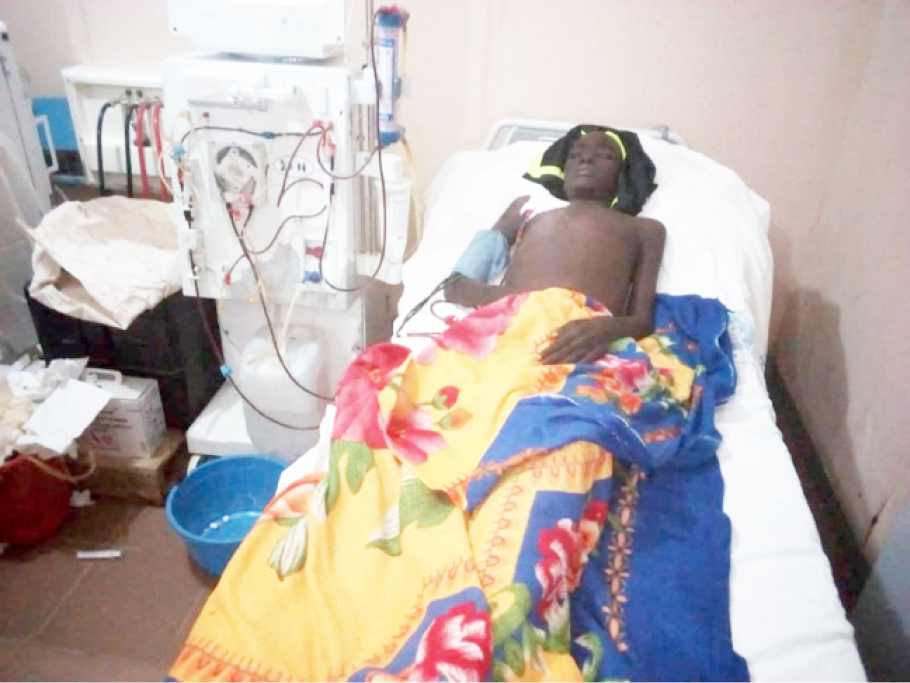 Some of the patients are also exposed to other ailments like hypertension, diabetes, sickle cell anemia, Human Immunodeficiency Virus (HIV) and Aids, as well as hepatitis.

Daily Trust on Sunday gathered that patients of renal failure in Kano State cut across various ages and sexes.

Munir Ibrahim, who spoke to our correspondent in his dialysis bed, described the experience as traumatising.  It was gathered that the 21-year-old Ibrahim was pursuing a national diploma at the Kano State Polytechnic before he was diagnosed with renal failure about a year ago. He said he had to defer a semester to attend to his deteriorating health condition, even as it keeps getting worse by the day.

Ibrahim, who is a victim of sickle cell anemia, attributed his condition to frequent blood transfusion.

“At 21, I have to be concerned about this condition because of the trauma associated with it. The opportunities I have missed and still missing are unimaginable. Don’t forget that I am currently in ND2 at the Kano State Polytechnic. I am supposed to be in school with my mates, but here I am, lying in bed and watching my blood as it moves round the machine,” he said.

Idris Shehu, 18, is another victim of kidney failure and hepatitis B positive patient. Shehu comes from Dawakin Kudu Local Government Area for sessions of dialysis in one of the hospitals in the state capital, three times a week.

It was gathered that he started dialysis 9 months ago after he discovered many health complications at Dawakin Kudu General Hospital. He said that at a point, he almost gave up because of the poor financial standing of his family to manage the situation.

“Living in this condition is the worst thing that has happened in my life. My mates are fending for themselves and helping their parents, but I am putting my parents into trauma as they struggle in difficulty to secure three sessions of dialysis for me every week, at the cost of N17, 000 each,” he said in tears.

Similarly, a parent to one of the kidney failure patients, Malam Nura Sani, described the disease as the worst nightmare to a victim’s family because of the financial burden of managing it. Sani, who was at one of the hospitals with his 12-year-old son, Ibrahim Nura, said he almost ran mad when his only son was diagnosed with chronic kidney disease earlier in the year. He said he had to sell some of his properties to sustain his ailing son through dialysis.

“I couldn’t believe my ears when the doctor said that the little boy would be placed on dialysis. In fact, I almost ran mad because I never thought a boy of that age could get such disease. More so, I do not have money to save the life of my son. That means I will watch him die gradually,” he said.

When our correspondent visited him in the hospital where he was having a dialysis session, the 12-year-old Nura looked weak, even as his legs and face were swollen.

Speaking on the devastating effect of the disease, a nephrology consultant in the AKTH, Dr Ademola Babatunde, appealed to the Federal Government to subsidise the cost of managing the disease, saying more people are dying every day. He said the disease, which is common among the aged and the elderly in some societies, has suddenly become a deathtrap for young people in the country. He said majority of the cases being recorded in various hospitals involved young people.

He said, “We are seeing a lot of patients, and our clinics are becoming busier than ever. Now, we are even seeing the young and the old. Just today, I saw a boy of 12 years with this chronic kidney disease.

“In the developed world, the disease is more of the elderly people, but here, young people are affected because a lot of them are having infections that are not properly taken care of, owing to poverty.’’

He identified poor medical practices, especially the indiscriminate use of herbal medicine as one of the major contributing factors fueling cases of kidney failure, and urged the people to always go for medical checks to know their blood sugar level, blood pressure, and to promptly seek the assistance of specialists once some abnormalities are noted. He argued that the best way to counter kidney disease is to prevent it by looking out for risk factors, including hypertension, diabetes, acute glomerulus nephritis and other infections.

“Our major problem now is those risk factors. Till now, a lot of people don’t know what their blood pressure is, their blood sugar level and other medical conditions. This means that in the next few years, more people will develop chronic kidney disease,’’ he said.

He appealed to government to expand the National Health Insurance Scheme (NHIS) coverage to include dialysis and kidney transplant, saying, “There are now many centres in Nigeria that are doing the transplant, such as Kano, Lagos, Abuja, Abia and Ife. If government at various levels can take responsibilities in this regard, the lives of ordinary people would be made better. We are still losing a lot of people to this kidney disease; people die every day.”