The UCU is embarking on the strike over disputes involving the failure of employers to improve pay, equality, casualisation and workloads. 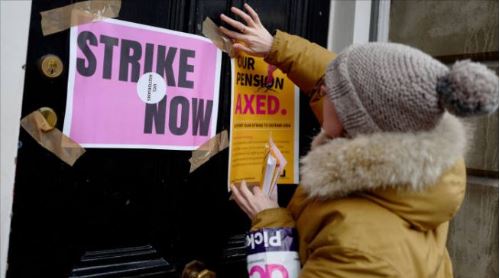 University lecturers and support staff in the United Kingdom are set to go on an eight-day strike to protest their pay, working conditions and pensions.

According to the BBC, members of the University and College Union (UCU) are expected to commence the action on November 25 which would last till December 4.

The UCU is embarking on the strike over disputes involving the failure of employers to improve pay, equality, casualisation and workloads.

The second dispute involves the changes made to the pension scheme – the Universities Superannuation Scheme (USS) – since 2011, which the UCU claimed could leave members £240,000 worse off in retirement.

The union members will also begin other forms of protests when they return to work, including working strictly to contract, not covering for absent colleagues and refusing to reschedule lectures lost during the strikes.

The UCU reportedly said staff have reached “breaking point” over a number of issues, including workloads, real-terms cuts in pay, a 15% gender pay gap and changes to pensions for staff in the Universities Superannuation Scheme (USS), which the union says will leave members paying in more and receiving less in retirement.

Jo Grady, UCU general secretary, was quoted as saying about 43,600 members would be taking the strike action for “systemic change”.

Grady said the higher education sector had “made a lot of money over the past 10 years” but that spending on staff in that period had gone down and that there had been “an attack on working conditions in the sector”.

She warned that the second wave of strikes could be held in the new year if the deadlocked disputes remain unresolved.

The university leaders, however, said they would try to lessen the impact of the action on students, adding that they want to work with the union to reach an agreement.

But the University and Colleges Employers Association and Universities UK warned that in order to meet the union’s current demands, employers “would have to divert unsustainable amounts of money from other budgets with potential consequences including for jobs, student support, course closures and larger class sizes”.

For the employers, Carol Costello of Liverpool University, was quoted as saying recent rises both in staff pay and in employers’ contributions to staff pensions were at the limit of affordability.

“It’s important that the… pension scheme trustees secure the benefits for the future of the 230,000 staff in the scheme,” Costello was quoted to have said.