Agu Evelyn revealed that she decided to thank God after all the difficulties she faced. 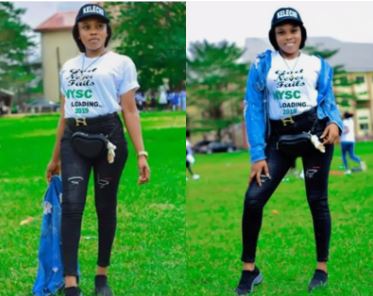 A Nigerian lady identified as Agu Evelyn has given thanks to God and her family members for supporting through the years of her studies in the university.

The young lady also narrated how she was able to pay for her school. In a chat with Legit.ng, Evelyn revealed that she decided to thank God after all the difficulties she faced. She explained that her aunt tried to discourage her from going to school and advised her to get married instead.

Evelyn said her aunt always told her that she was wasting her time. She noted that the words gave her the courage to keep going and she applied for a job to pay for her school.

She said: "First of all, I want to thank God Almighty for making it possible. God Almighty who has wiped out tears, pain, and shame from our eyes, I say thank you baba. And aunty ur hate speeches gave me motivations and that's why I'm a graduate today. In 2014 I came to u to give u the good news that I gained admission and I will be leaving for school next week, and you said to me stop allowing ur mother to deceive u, go and get married like your cousins (her daughters), you and ur mother should stop this YEYE GRA GRA, there's no money and nobody to train u in school. I never forgot any of these words till today and I kept praying about it too, back in school, I applied for the post of a waitress in a nearby hotel and got the job, with that I was able to help my mum foot some of my bills in school. Today I'm the first graduate of Agu family. THANKS, AUNT..... YEYE GRAGRA DON PAY."