It was reported that the incident happened on November 18, 2019, after the November 16, 2019, governorship election in the state. 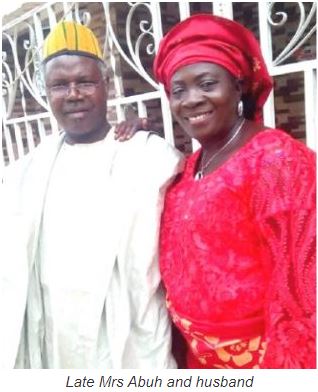 The gruesome killing of 60-year-old Mrs. Salome Acheju Abuh in her home at Ochadamu in Ofu Local Government Area of Kogi State has continued to elicit reactions from family members, friends and groups from within and outside the state.

Mrs. Abuh, a PDP women leader in the area, who also doubled as a Coordinator of the Wada/Aro Governorship Campaign Council, was holed up in her home and set ablaze by political supporters alleged to be from the ruling party.

Daily Trust Saturday reports that the incident happened on November 18, 2019, after the November 16, 2019, governorship election in the state.

Daily Trust Saturday learnt that the suspected thugs who invaded the home of Mrs. Abuh at about 02:00pm, locked all exits in the house and poured petrol before setting the house on fire.

The hoodlums were said to have prevented locals from coming to the rescue of the woman as they shot sporadically to scare the people away and kept watch until the building was razed down. Mrs. Abuh reportedly attempted to escape through a window but was prevented by the metal burglary proof and bullets raining in her direction.

When contacted, spokesman of the Kogi Police Command, William Aya, confirmed the incident, saying it was a case of culpable homicide and mischief. Aya said on November 18, 2019, at about 04.30pm, one Musa Etu of Ochadamu, Ofu LGA reported at the station that at about 10.30pm of same date, there was a misunderstanding between one Awolu Zekeri (35) years, a member of the APC, and one Gowon Simeon, a member of the PDP, both of Ochadamu.

He said, “In the process, Simeon stabbed Zekeri with a knife on his lap and he (Zekeri) died on his way to the hospital. “As a result, angry youths in the area mobilised to the house of one Simeon Abuh of the same address who is an uncle to the suspect, set it ablaze, thereby burning one Salome Abuh, aged 60 years. “Meanwhile, the Police Mobile Force (PMF) and Police Special Forces (PSF) have been drafted to the area to prevent any breakdown of law and order. The investigation is ongoing.”

Spokesman of the Wada/Aro Campaign Council, Faruk Adejoh-Audu, while lamenting the incident, expressed fear that “the killing spree” might escalate if urgent steps were not taken to quell the situation.

Adejoh-Audu said, “So far there’s no indication that the Kogi State police will arrest her killers or even prevent further attacks and killings of our people.

“We are calling on all men of good conscience to immediately help the people of Kogi State appeal to the Inspector General of Police to rein in thugs and protect our people whose only crime was that they voted for their choice, votes that were never allowed to count.

Late Mrs. Abuh has been described as an influential and active grassroots politician. She was a women leader for the PDP from the early years of her political career. She had her first elective position as a councilor in Ofu Local Government Council of Kogi State between 2003 and 2007.

In 2007, she contested for Idah Federal Constituency as the only woman among the contestants, but was not successful. She was also a Special Assistant on Grassroots Matters to a former Governor of Kogi State, Capt. Idris Wada.

She also sought to represent the people of Ofu at the state assembly but was also not successful. Until her gruesome killing, she was an active member of the PDP and campaign team member for the PDP governorship candidate, Engr. Musa Wada, in her area. Her associates said her political influence in her locality and active involvement in politics of the area made her a threat to her political rivals.

Although the late Mrs. Abuh had been living with her family in Abuja for some time now, she was always abreast of the political activities back home.

She was at home in Ochadamu during the governorship election to mobilise her supporters and also monitor the political process with the expectation of victory for her party. Little did the mother of five know that her trip from Abuja to her Ochadamu country home for the election was going to mark the end of her life.