The declaration of Nnamdi Kanu’s lawyer wanted by the police has earned a reaction from IPOB. 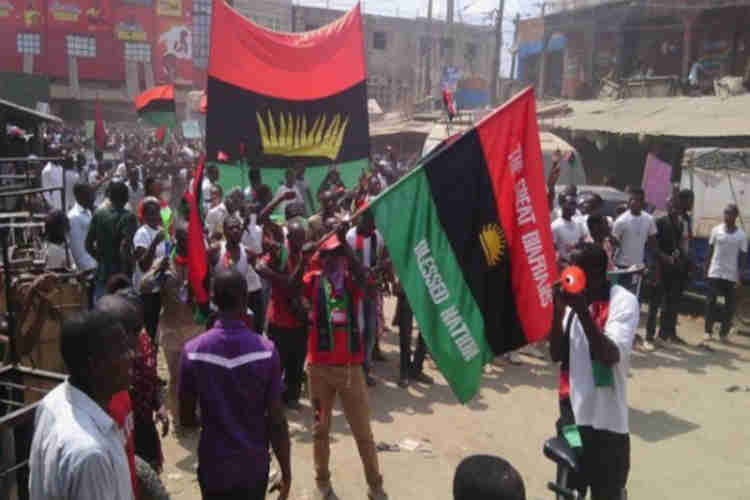 The Nation reports that the Indigenous People of Biafra (IPOB) has described as baseless the Police declaration of Nnamdi Kanu’s lawyer, Ifeanyi Ejiofor wanted.

The group said the plan was not only to intimidate other lawyers from accepting IPOB’s cases but to truncate its struggle for a republic.

The Anambra Police Command had on Tuesday declared Ejiofor wanted following alleged killing of two police officers in Oraifite in the Ekwusigo Local Government Area of the state.

The police said he was declared wanted over alleged cases of conspiracy, murder, treasonable felony, arson and armed robbery.

But IPOB’s Media and Publicity Secretary, Emma Powerful, in a statement maintained that Ejiofor was innocent of the allegations levelled against him.

The statement read in part, ” The only reason why the police declared our lawyer wanted is to stop him from handling IPOB cases and to make sure he does not attend court in January 2020.

” Part of the wider motive, however, is to intimidate lawyers into not accepting IPOB cases. In their warped thinking, Aso Rock thinks this will pave the way for spineless judges to do their bidding. They want to use the courts to stop the raging Biafra agitation.

“The purported and useless declaration made by the Commissioner of Police in Awka against IPOB lawyer Barrister Ifeanyi Ejiofor is baseless.

“We all are aware of how this same Nigeria Police and the military used the same words when they invaded the home of our leader on September 14, 2017.

“They can go on deceiving gullible Nigerians about their motive for the barbaric invasion of Barrister Ejiofor’s home but the facts are all there for the world to see.

“When they invaded Afaraukwu it was in pursuit of a truck laden with explosives, today the story has changed to enforcement of a mere petition.

“It’s the height of incredulity to think that any sensible person will buy such a story.

“Nigeria Police always intimidate and kill people at will and they always try to justify their crime by declaring people wanted.

“Nigeria Police must come out to tell the whole world why they took this decision to kill Barrister Ejiofor and his family. Police shooting sporadically in the compound of a man they claim they invited for questioning leaves their motive in no doubt in the minds of the public. They came to kill him.

“Those responsible for this carnage in Ejiofor’s compound will pay dearly for it and they know they would,” the IPOB publicist stated.

Meanwhile, the people of Oraifite have condemned the killing of two senior police officers, an assistant commissioner of police and assistant superintendent of police in the community.

The community, under the auspices of Oraifite Improvement Union (OIU), in a statement, totally dissociated itself from the acts of the criminals responsible for the abomination.

It said the act was uncharacteristic of Oraifite culture and tradition.

The trio of Sir Sunny Igboanuzue, President General of Oraifite Improvement Union his secretary Offor Uche, and the traditional ruler of the Oraifite,, HRH Igwe Daniel Udeoji signed the statement on behalf of the community.

The statement read in part, “The leadership of Oraifite town cannot keep quite and allow criminal gangs, cultists and miscreants take over the town and tarnish the image of the good people of Oraifite”, the statement noted.

“What happened on Dec. 2, 2019, leading to the killing of some men of the Nigerian Police Force was uncharacteristic of Oraifite culture and tradition.

“The acts are condemned without equivocation in its totality. The good and peace-loving people of Oraifite totally dissociate themselves from the acts of the criminals responsible for the abomination.

“The OIU, the Isi Obi of Oraifite, the Obis of Oraifite, the Quarter Chairmen and the entire people will provide full, unrestrained and active support to the Nigerian Police Force and other Law Enforcement Agencies towards a fair and effective investigation of this dastardly act in order to bring all those directly, and indirectly responsible to book.”

The statement added that the criminal activities of certain nefarious groups which acted as catalysts to the tragic events of Dec.2 have been proscribed and banished from operating in Oraifite.

The community warned that anybody found to indulge in any of the proscribed practices shall be immediately apprehended and handed over to Law Enforcement for due prosecution as a criminal.

Oraifite people further stated that all groups proscribed by law or through the exercise by any constituted authority of Government- whether State or Federal-or legitimate powers of office, have no place of operation in Oraifte.

The people, however, expressed condolences to the Nigerian Police Force in particular and the families of the officers who lost their lives in the unfortunate incident.