The boy was rushed to the Annavasal Gemeral Hospital where the duty doctor checked the boy's nostrils. 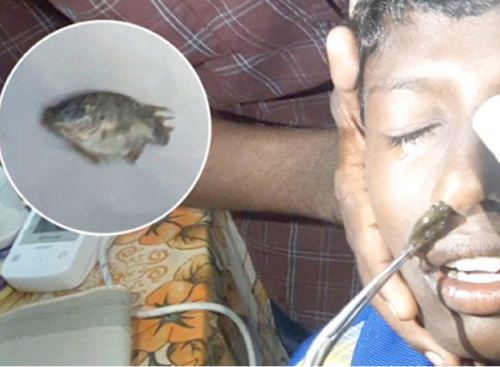 In a shocking incident, a fish has been removed alive from the nostril of a boy after a 3-hour-long surgery by doctors.

Interestingly, the fish was alive until it was removed. The fish entered when the boy was taking his bath in a farm well. The strange incident took place in the Pudukkottai district in Tamil Nadu., India.

According to sources, S Arul Kumar (12) of Mannavelampatti near Annavasal in Pudukkottai went for a bath along with his friends in a farm well near his house last Tuesday evening. Arul then sensed that something had entered his nose, and soon developed severe pain.

He was then rushed to the Annavasal Gemeral Hospital around 10 pm and the duty doctor, Kathiravan, who checked the boy’s nostrils, confirmed a fish being stuck inside Arul’s nose.

After a three-hour-long ‘operation’ the doctor removed a live ‘tilapia’ fish from the boy’s nose, but it died soon after. The doctor observed that the trapped fish could have even caused a threat to Arul’s life.

The boy after an hour’s medical observation was sent back home.