How Senior Police Officers Died In Anambra: The Inside Story


The story has been told of how two senior police officers were reportedly killed in Anambra state. 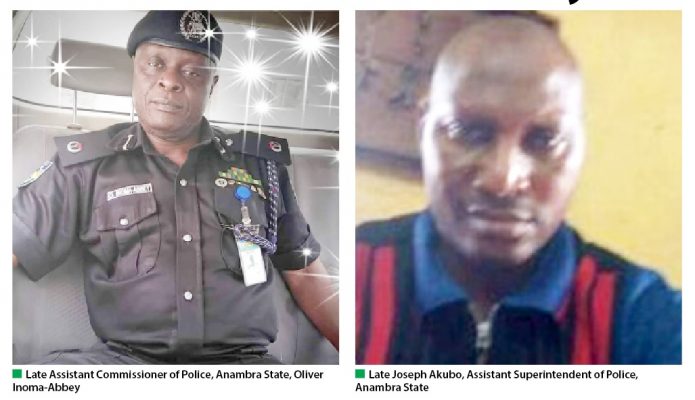 Controversies have continued to trail the alleged killing of two senior police officers from Anambra command by suspected members of the Indigenous People of Biafra (IPOB). The incident reportedly took place at the house of the group’s lawyer, Mr. Ifeanyi Ejiofor at Ifite, Oraifite in Ekwusigo Local Government Area.

It was also alleged that during the fracas, the police killed two members of the IPOB and wounded many.

While some people are blaming the police for the incident, others are accusing members of the IPOB of taking laws into their hands, saying the police have the legal right to invite or arrest any person suspected of criminal activities, or whoever has a complaint against him or her.

The two officers who lost their lives in the unfortunate incident were Assistant Commissioner of Police Oliver Abbey, the area commander of Oraifite command and Assistant Superintendent of Police Joseph Akubo, attached to the Special Anti Robbery Squad (SARS).

The spokesman of the Anambra police command, Haruna Mohammed, said there was a formal complaint against one Ifeanyi Ejiofor, a lawyer and suspected member of the proscribed IPOB in Oraifite, over an alleged case of abduction, assault and malicious damage to property. Following the report, police patrol teams, led by the area commander, Oraifite, ACP Oliver Abbey, mobilised to the scene to arrest the suspect, who declined invitation.

He alleged that as soon as policemen arrived at the house, armed men suspected to be IPOB members descended on them, setting one patrol vehicle ablaze and attacked them with guns and machetes, killing two officers in the process.

According to him, in response, the command deployed reinforcement from the state headquarters, in conjunction with soldiers and other security agents, who cordoned off the area to fish out the culprits, while a joint patrol was going on to prevent further breakdown of law and order.

Meanwhile, the command has declared Ejiofor wanted for his alleged involvement in the killing of the two police officers.

However, a source in Oraifite, who claimed to have witnessed the fracas, said it was between two cult groups, namely, Eke and Afor, which have been fighting in the community.

Another eyewitness further alleged that the incident did not have anything to do with Ejiofor or members of the IPOB, saying the police may have gone to the lawyer’s house in error.  He alleged that the police actually shot and killed two people in Ejiofor’s house, a situation that led to retaliation by youths in the community. According to him, in the process, two policemen lost their lives.

Another eyewitness account alleged that Mr Ejiofor had an issue with a rival group, and because he has links with the IPOB,  he called members to assist him, while Oraifite  people called the police to save them.

According to the source, the police invited Ejiofor to settle the matter between him and his rival  cult group, but he ignored the invitation. Meanwhile, the villagers kept on calling the police to come to their rescue, a situation that prompted the area commander to mobilise his men for action.  The source said the police officers went there to settle the clash between two rival groups when they were killed.

However, Ejiofor has denied all the allegations against him, saying he did not commit any crime. He said he had been under attack because he has been defending members of the IPOB and Nnamdi Kanu.

He said the fact that someone lodged a complaint against him was not sufficient enough for security agents to use force on the people they found in his compound.

“I am a lawyer with addresses. I have two chambers, one in Abuja and one in Anambra State. I am a very serious legal practitioner. I go to court almost every day. So I can’t run away from the police,” he said.

He also said that for more than 10 years, he had been in an unbroken relationship with the police and they know him as a peaceful gentleman; hence he is not their enemy.

“I have been in different courts with them – in Abuja, Lagos, Port Harcourt, Akwa Ibom, Anambra, Enugu and other places. And I defeated them in virtually all the cases I had against them.

“Members of the IPOB are merely exercising their rights as the constitution provides, so the organisation is not a terrorist type. The terrorism tag on them has been effectively challenged in the Court of Appeal. So I do not know where I have got it wrong. I do not know the offences I have committed for becoming their lawyer.

“I am calling on the Nigerian Bar Association (NBA) to intervene. I have already made contact with the chairman of the NBA, Abuja Branch to take it up. I want this matter to be steadily investigated,’’ he said.

On their part, the Anambra State House of Assembly urged the police to bring perpetrators of the heinous crime at Ifite village to justice. Moving a motion under matter of urgent public importance, the member representing Ekwusigo constituency, Mr Onyebuchi Offor, drew the attention of the House to the ugly incident. He said that during the burial of one Mr John Okafor in the area, two cult groups had fracas, and when policemen went there to restore law and order, the boys opened fire on them. He said many houses and shops were burnt, adding that the area had been deserted.

While commiserating with the people of the area over the ugly incident, the Speaker of the House of Assembly, Mr. Uche Okafor, assured that the perpetrators would be brought to justice.

Reacting to the incident, the Oraifite Improvement Union (OIU) condemned violence and lawlessness in the community. Six masquerade groups, whose activities allegedly caused the problem on Monday, have been banned in the community. The banned groups are Otu-Eke, Otu-Afor, Otu-wo, Otu-Orie and Out-Ube, Otu Ayaka and all other forms of night masquerades.

The OIU also said the activities of some nefarious groups who acted as catalysts to the tragic events of December 2 had been proscribed from operating in Oraifite. They warned that anybody found indulging in any of the proscribed practices would be apprehended and handed over to law enforcement agents for prosecution. According to them, they cannot keep quiet and allow criminal gangs and miscreants take over their community and tarnish the image of the people.

“We totally condemn the act. The good and peace-loving people of Oraifite totally dissociate themselves from the abominable activities of the criminals.

“The OIU, Isi Obi of Oraifite, the Obi of Oraifite and the entire people will provide full and active support to the police and other law enforcement agencies towards a fair and effective investigation of this dastardly act. All those directly and indirectly involved in that ugly incident will be brought to book,’’ the stated.

But members of the IPOB, on Wednesday, said the police declared Nnamdi Kanu’s lawyer, Ifeanyi Ejiofor wanted in order to stop the struggle for the independent nation of Biafra. According to the group, the police only want to intimidate lawyers and scare them from taking up briefs from her members.

“The police always intimidate and sometimes kill people at will; and they always try to justify their crimes by declaring people wanted. They should tell the whole world why they shot sporadically in the compound of a man they claimed they invited for questioning,’’ they said.

They also threatened that those responsible for the carnage at Ejiofor’s compound would pay dearly for it.

In a press release by the media adviser to Nwodo, Chief Emeka Attamah, the apex Igbo cultural organisation called for a judicial inquiry into the incident.