Details have emerged about the suspects who allegedly attacked the Managing Director of Maersk Nig. Ltd., Gildas Tohouo and his family. 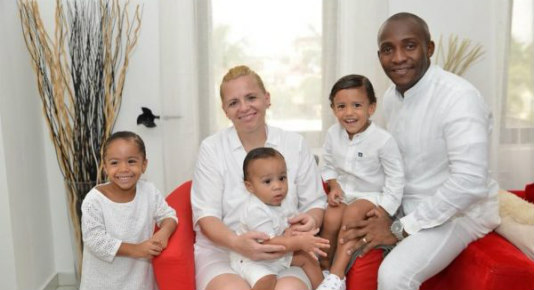 Gildas Tohouo and his family
Two suspects have been arrested in connection with a robbery attack on the residence of the Managing Director of Maersk Nig. Ltd., Gildas Tohouo, a report by Channels Television has revealed.
The incident occurred on Sunday at the Cul-De-Sac compound on Lugard Avenue in the Ikoyi area of Lagos State.
The suspects – Olamide Goke (an in-house electrician) and Ade Akanbi (his accomplice) had carried out the attack on the family while pretending to be in the building to rectify an electrical fault.
The Police Public Relations Officer in Lagos, Mr Bala Elkana, confirmed the incident and the arrest to Channels Television.
He explained that men of the Lagos State Police Command moved into the area shortly after the incident occurred and arrested the suspects.
Elkana disclosed that Tohouo’s wife, Bernadette, a Hungarian and mother of three, died from injuries sustained from the attack.
On his part, Tohouo was critically injured and has been taken to an undisclosed hospital in the Victoria Island axis of the state.
The Police Public Relations Officer added that the suspects have been transferred to the Homicide Section of the State Criminal and Intelligence Department, Panti in Yaba, for discreet investigation and subsequent prosecution.
Top Stories