A man has been sent away from his community for having sleeping with his daughter and impregnating her. 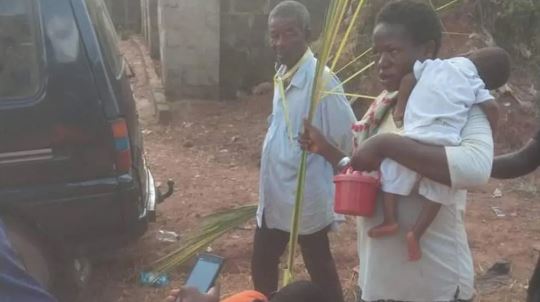 The banished man and the daughter

An unidentified man said to be in his late 60s has been banished from Okofia, Otolo Nnewi for impregnating his own daughter twice.

A Facebook user, Chinonso Okoro who took to a Facebook group to share the news of the man’s banishment said the community decided to send the man away after he got his daughter pregnant a second time.

A picture shared by Chinonso showed members of the community handing the man and his daughter fresh palm fronds, while some more palm fronds were tied round the man’s neck and his daughter’s legs as signs that they were engaged in abominable acts.

Another picture showed a bus in which their property was loaded, ready to be sent out of the community.

The unidentified man is said to hail from Okija, in Ihiala Local Government Area and while another picture showed his daughter still had a less than a year’s baby, the man has again impregnated her.

Chinonso in his post said, “Happening now at Okofia Otolo Nnewi the location of the Unizik college of health. This man from Okija impregnated his own daughter for the second time. Now they’re asked to leave Nnewi. Wonders shall never end.”