The Lagos state government has taken over the prosecution of a 19-year-old 'yahoo boy' who set his girlfriend on fire. 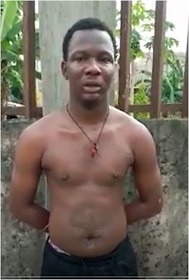 According to a report by Sun News, the Lagos State Attorney-General and Commissioner for Justice, Mr. Moyosore Onigbanjo has directed the Director of Public Prosecution (DPP) to takeover the prosecution of a 19-year-old man, Orji Ifeanyichukwu Victor who was alleged to have set his 24-year-old girlfriend, Alabi Tolani Maria ablazed.

The Commissioner ordered the DPP to immediately takeover case file of the suspect from the police for deligent prosecution.

Mr. Onigbanjo disclosed this to journalists at a parley held in his office on Tuesday.

Operatives of the State police command from Iba police station arrested Victor, for setting Mariam ablazed because he suspected that she has another lover.

Elkana said the incident took place in Ojo, Lagos, where they both lived in Ifeanyichukwu’s N600,000 per annum apartment.

The suspect who resides at G54 Army Post Service Housing Estate, Ojo, Lagos was arrested after setting his girlfriend ablazed on Saturday.

According to the statement, the suspect had confessed that he used petrol to set the victim ablaze. The victim died during treatment at Igando General Hospital in the early hours of yesterday.