I Am Sorry - Fayose Begs PDP Members In Ekiti


Fayose spoke on Tuesday at his country home in Afao-Ekiti while addressing party members across the 16 local government areas and the 177 wards in the state. 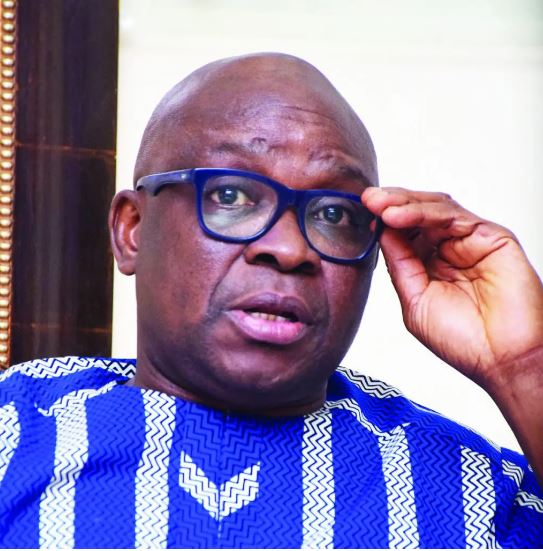 The immediate past Governor of Ekiti State, Mr. Ayodele Fayose, has extended olive hand to all aggrieved members of the Peoples Democratic Party (PDP) in the state to work together in unity in the overall interest of the party.

Fayose, who apologized to all aggrieved members who he might have wronged when he was governor, said the party must be repositioned ahead of future elections in the state.

He spoke on Tuesday at his country home in Afao-Ekiti while addressing party members across the 16 local government areas and the 177 wards in the state.

The former governor said, “We are on a mission to repositioning the party because truly we need a new attitude as members of this party. We must tell ourselves the truth that there is nothing to share in failure and we must join hands to achieve something tangible.

”I know some persons are aggrieved and I know we are humans. I apologize to all those that I have offended; let us come together in unity for this our party not to die in this state. That is my priority as the leader.

”I am doing this after one year I left office just to allow the present All Progressives Congress to display what they have for the people and you can all see for yourselves. I am not here for my selfish interest but just to ensure this party does not fail.”

Fayose, who used the meeting to officially congratulate Senator Biodun Olujimi on her recent victory as the lawmaker representing Ekiti South senatorial district, noted that she remains the leader of the party in the state.

While explaining that creating different groups within the party would not be the best option, Fayose, however, assured that all issues and tendencies would be resolved for the party to reclaim the state from the APC in future elections.

He regretted the violence and alleged electoral malpractices that marred the last Saturday’s local government election, saying he warned the leadership of PDP in the state not participate in the poll for obvious reasons.

”Everybody should come back to the party. I am open to reconciliation. If Senator Biodun Olujimi call you for meeting tomorrow, go there and listen to her. All of us are leaders , don’t let us factionalize this party. I am congratulating her (Senator Olujimi) and I don’t have any issue with her and I am sorry for what happened in the past.”