The House, at the plenary on Wednesday, resolved that the leadership should intervene in the crisis within 24 hours to avert the strike. 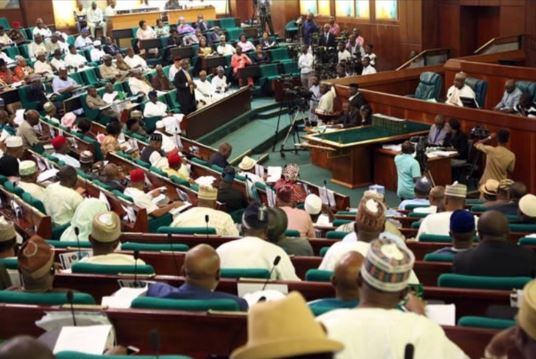 The House of Representatives has resolved to intervene in the crisis between the Federal Government and workers in the power sector.

The House, at the plenary on Wednesday, resolved that the leadership should intervene in the crisis within 24 hours to avert the strike.

This was based on the unanimous adoption of a motion titled, ‘Urgent Need for the Federal Government to Interface with the Managements of Electricity Companies and the National Union of Electricity Employees to avoid impending electricity blackout.’

The parliament urged the Federal Government to direct the Ministers of Power, Saleh Mamman; and Labour, Employment and Productivity, Chris Ngige, to amicably resolve all issues as raised by NUEE.

The House further directed the Committees on Power and Labour to, respectively, “invite the ministers of Power, Labour, Employment and Productivity; (Acting) Director-General of the National Pension Commission (Aisha Dahir-Umar); and the heads of the various GENCOS and DISCOS to investigate the allegations against the companies and report back to the House in two weeks.”

Following the adoption, Gbajabiamila asked the relevant committees to write the ministers, workers and other stakeholders to appear at a hearing scheduled for 2pm on Thursday.

Moving the motion, Okechukwu recalled that a petition dated November 7th, 2019, was written to the Minister of Power by the National Union Of Electricity Employees.

He said NUEE copied the Distribution Companies and Generation Companies, where the union warned and gave a 21-day ultimatum, after which a nationwide strike would be declared it their demands are not met by the electricity companies.

The demands include non-payment of salary arrears, remittance of pension deductions, refusal to pay over 2000 disengaged workers of the Power Holding Company of Nigeria since 2013, underpayment of over 50,000 ex-PHCN staff (members), casualisation/outsourcing of workers.

Okechukwu also recalled that the workers, under the auspices of the NUEE, accused the Ministry of Power of failing to respond to their strike notification letter, which expired Tuesday and the union, and threatened that they had no other option than to withdraw services without further notice, having exhausted every avenue for resolution of the dispute.

The Deputy Minority Leader said, “The House is concerned that their resolve to go on with the strike without further notification came as a result of the information by a power sector consultant, Mrs. Rahila Thomas, wherein she stated that the GENCOS and DISCOS direly needed N1.2tn bailout to improve their services.

“The House is concerned further that if this threat is carried out, the whole country will be plunged in total blackout and considering the consequential role which electricity plays and the dependence upon electricity by all sectors of the country ,including the National Assembly, there will be severe economic losses, which will further impact our society negatively.”

Okechukwu expressed concerns that Nigeria, as a member of the International Labour Organisation, had ratified over 40 international labour conventions and had, through the National Assembly, enacted the Labour Act, among other labour laws, by which the country swore to protect the right of workers in the country.

Okechukwu added, “The House is bothered that if this threat by NUEE is not immediately looked into and nipped in the bud, it will result in serious financial losses by both private and government establishments, and as well as security challenges in our country.”