Allegations Of Rights Abuses: We Are Not Answerable To US, UK - Femi Adesina


Adesina was asked to react to reports from the EU, UK and the US about Nigeria's alleged high record of human rights abuses. 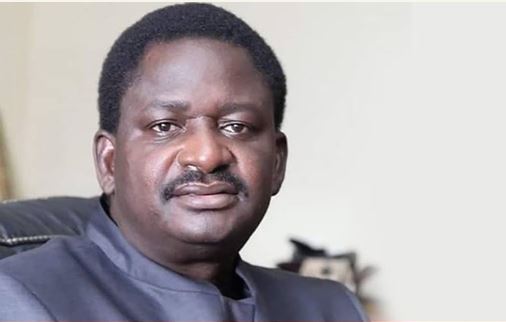 The Presidency says Nigeria is a sovereign nation and will not be bothered about the reports from the United States, the United Kingdom and the European Union as regards human rights abuses.

The Special Adviser to the President on Media and Publicity, Femi Adesina, said this on Channels Television’s ‘Politics Today’ programme on Wednesday.

Adesina was asked to react to reports from the EU, UK and the US that Nigeria’s high record of human rights abuses.

He was also asked to react to the invasion of the Federal High Court, Abuja by men of the Department of State Services who arrested the Publisher of SaharaReporters, Omoyele Sowore, last Friday.

When asked to respond to criticisms against the regime of the President Muhammadu Buhari by Prof. Wole Soyinka, Adesina said the Nobel laureate was free to express his opinion.

“We respect Prof. Soyinka. You don’t have too many of them in the country or even on the continent. He is an avatar and he is well respected but his opinion will remain his opinion. It will be considered and if there are things to act on, we will act on them,” he said.

Adesina said the Presidency would not take the opinion of a few Nigerians as that of the majority.

He said the ultimatum issued by 14 civil society groups as well as the editorial by The PUNCH was not the mind of the majority of Nigerians.

“Genuine issues will be looked into. We have had instances in which the government had to reverse itself because there were concerns raised. It shows that the government is responsive but you cannot listen to a babble of voices. It will distract you from what you are doing,” the President’s spokesman said.

When reminded of the fact that he was also a journalist before taking up the job to be the President’s spokesman, Adesina said he would remain true to his calling.

“I am still in the media. It is just that the roles are a bit reversed… when I am done with government by the grace of God, I will still return to the media,” he said.

Adesina said he would not make any comment on the allegations levelled against the nephew of the President, Mamman Daura; and the Senior Special Assistant to the President on Media and Publicity, Garba Shehu; by the First Lady, Aisha Buhari.

In a statement on Wednesday, Mrs Buhari had alleged that Shehu, took orders from Daura, adding that Daura ordered Shehu to issue a statement announcing that the office of the first lady had been scrapped.

When asked to react to the allegations, Adesina said the questions should be directed to Shehu since it was he that the allegations were levelled against.

He further stated that he did not like to meddle in the President’s family affairs except he was asked to speak on the matter by the President himself.