Obaseki, Not Oshiomhole Is Leader Of Edo APC - Tony Momoh


Momoh advised Oshiomhole to focus on his task at the national level saying there are lots of issues that needs to be addressed by the national chairman. 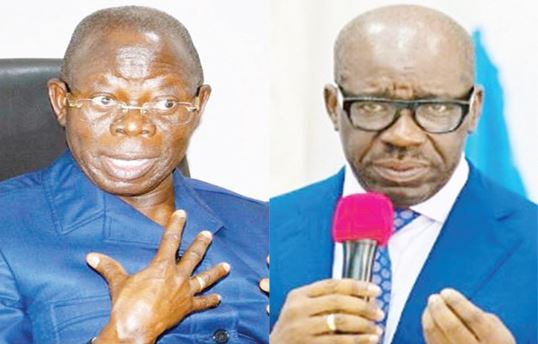 Prince Tony Momoh, a former Minister of Information on Wednesday said Adams Oshiomhole, national chairman of the ruling All Progressives Congress (APC) has no business interfering in the affairs of the party in Edo State.

Speaking in an interview with Daily Independent, Momoh, a former national chairman of the defunct Congress for Progressives Change (CPC) said the task of organising and funding the party is the sole responsibility of Governor Godwin Obaseki, who by the party’s constitution is the leader of the APC in Edo State.

According to him, going by APC’s constitution, the governor is the chief executive officer of the party in any state where APC is the ruling party.

He advised Oshiomhole to focus on his task at the national level saying there are lots of issues that needs to be addressed by the national chairman of the party nationwide.

“Oshiomhole is the national chairman of APC. In states where we have a governor, the head of the party or chief executive officer of the party in the state is the governor. That is the structure of APC. So, I don’t think Oshiomhole and Governor Obaseki are at loggerheads.

“Obaseki is the Chief Executive Officer of the party in Edo State according to our structure. He organises the party, funds the party and so on. I believe Oshiomhole is not claiming to be the party leader or chairman of APC in Edo State, because he is not.”

As national chairman, he has his hands full at the national level so what will he be doing in Edo state? He has no business in the organisation of the party in Edo state”.

“ I know some people who are trying to cause crisis in Edo state are doing so in the name of Oshiomhole but I don’t think Oshiomhole can be advised to champion anybody’s cause in Edo state because he has so many things to do at the national level” he said.