Policemen in Rivers state have arrested the ex-boyfriend of a final year Law student killed inside her room. 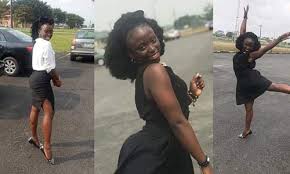 Miss Matilda Mark Itonyo.
The Rivers State Police Command has arrested one suspect in connection with the gruesome murder of a 500-level Law student of the Rivers State University, Miss Matilda Mark Itonyo.
According to Punch, the suspect, whose name was withheld by the police, was only identified as a former boyfriend of the murdered student.
It was gathered that the police had in the early hours of Saturday tracked the suspect to his house in Port Harcourt before taking him away to the State Criminal Investigation Department.
The 24-year-old Matilda was stabbed several times in the neck and head by her assailant(s) at her private apartment outside the university campus.
The killers were said to have broken into her room in the early hours of Tuesday and allegedly raped her before snuffing life out of her.
The incident, according to sources, forced some of her course mates to shun classes when they got wind of the incident.
Confirming the arrest of the suspect, the state Police Public Relations Officer, Mr Nnamdi Omoni, explained that he was apprehended for interrogation in connection with Matilda’s murder.
He stated, “We cannot say that we have arrested the killer of the student. He was only arrested for interrogation and at the end, if he is found culpable, he will be prosecuted. But if he is innocent, he will be allowed to go.
“Yes, the suspect is the former boyfriend of the late student. He was arrested on Saturday morning after being tracked to his residence.”
The father of the deceased, Mr Ebikene Itonyo, told Punch that he rushed to the state CID when he learnt that a suspect had been arrested.
Ebikene called on the police not to relent in their efforts to fish out the killers of his daughter and bring them to justice.
“I was at the state CID. I rushed to the place when I was told that one of the suspects had been arrested. We know that the suspect will deny, but I think the police must have seen some certain things that made them to arrest him,” Ebikene added.
Top Stories