A video of Ike Onyema and lover, Mercy Eke dressed in a traditional attire has surfaced on social media with many people congratulating the couple. 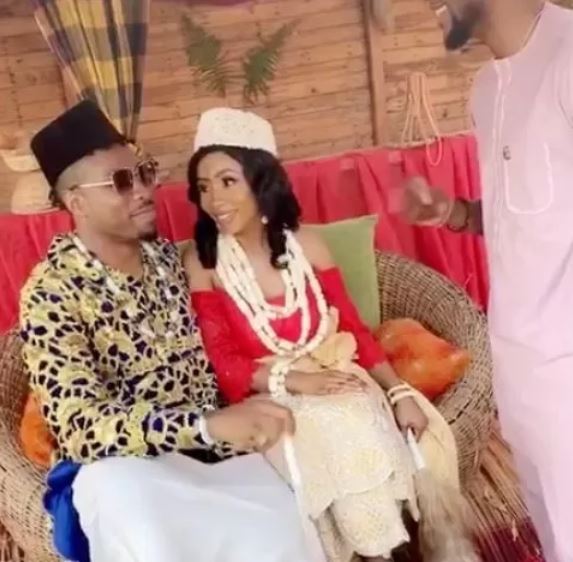 Mercy and Ike hold wedding introduction
Big Brother Naija 2019 couple, Ike Onyema and Mercy Eke seem to have held their wedding introduction ceremony.
Many people including friends have been sending in their congratulatory messaages after a video from the ceremony was posted by their friend, Omashola Kola Oburoh.
However, many people have been debating the alleged ceremony as the couple made no prior announcement regarding their big day. So it came as a surprise to their fans when Omashola shared a video of them fully clad in traditional attire on Instagram, with the caption “Congratulations” guys.
In the video, Ike can be heard proudly telling Omashola; “I am a married man now”.
Recall that months ago, Ike revealed that Mercy’s emergence as the BBNaija 2019 'Pepper Dem' winner will only have a positive effect on their relationship which was initiated and nurtured in the BBNaija house.
Speaking on his affair with Mercy while in the house, Ike said, though he didn’t plan for the relationship, the connection was too strong for him to fight. “I didn’t plan for any relationship in the house but you know, the connection was just too strong to fight.”
On Tuesday, October 8, 2019, Mercy opened up on her relationship with Ike saying their affair was more than BBNaija house. She made this known at a press briefing in Lagos after her victory at the reality TV show.
Watch video below: