Joshua said the foundations for recapturing the titles was laid in his ability to accept his first defeat to Andy Ruiz Jr in New York in June and improve. 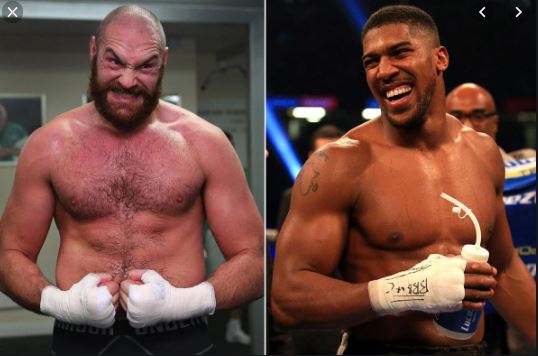 Anthony Joshua says he is willing to travel to the United States to spar Tyson Fury to help him prepare for his rematch with Deontay Wilder, because he says he believes Fury is more likely to fight him that the American.

"I think Tyson Fury would fight me quicker than Wilder would. If that's the case, I want Fury to win, because I just want to fight,” Joshua said. “To have that fight here on British soil? Man, can you imagine that?”

Joshua was in the Sky Sports News studios in west London for his first interview since returning to the UK from Saudi Arabia last Tuesday, where he regained his WBA, WBO, IBO and IBF heavyweight titles. Fury is due to face Wilder for the WBC title in Las Vegas on February 22 and has just switched trainers to SugarHill Steward.

But Joshua said he believes Fury will win and is willing to help in his rival’s preparations. For Fury’s first fight with Wilder in 2018, one of his sparring partners was Lawrence Okolie, a boxer that Joshua manages.

“Fury, if you need me for sparring, we’re going to fight one day, I’ve sparred Tyson Fury when we were kids anyway. I would go out to America and spar Tyson Fury and get him ready for this Wilder fight.

“I would like that fight, because I think Fury would fight me faster than Wilder would.”

Joshua said the foundations for recapturing the titles was laid in his ability to accept his first defeat to Andy Ruiz Jr in New York in June and improve.

“I used to listen to a lot of motivational videos and they would say ‘you have to go through the pain, sometimes you are going to fail’,” he said. “When I was winning, I’d think, they don’t talk about me, I’m a winner. But when it happened I had to accept it and understand it.

“That’s what December 7 was about. We need more resilient people. [When people said] I’ll retire if you lose the next one, I thought that’s not showing resilience. We are a resilient species. I want to come back, evolve from that situation and become better. I showed strength in my team, strength in my character and strength in the school of boxing that I come from.”

He also said he took on board the opinions of his many doubters ahead of his rematch.

“I had to understand that the same way I was built up is the same way I can be taken down. I understood the parallels. I used [the voices] to my advantage, because I feel people who can criticise you only want you to see you do better because they’ll point out every flaw in your game.

“December 7, I won, but it is the start of a change in my boxing style and boxing IQ. I had to make some real adjustments in a short space of time and December 7 was a trial and error period. I think I beat Andy 12 rounds out of 12.

“It will nice to do another 4-5 months of training and see how I develop going in to my next fight.”