Exposed! See Man Who Impregnated His Own Teenage Daughter In Ogun (Photo)


A man has been exposed and nabbed after allegedly getting his own teenage daughter pregnant in Ogun. 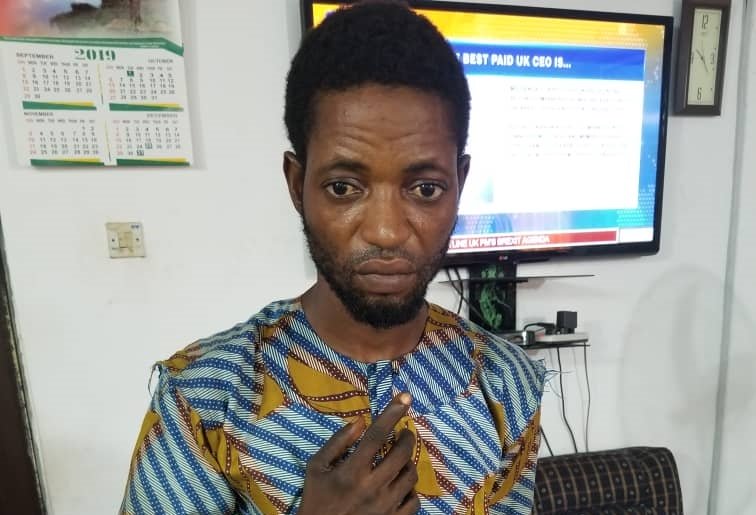 According to a report by The Nation, the Police have arrested an incestuous man; Taofeek Oyeyemi, for impregnating his 16 years old biological daughter.

Taofeek, 42, was arrested following a complaint by the girl’s mother who reported at the Ewekoro police station that her daughter who has been living with her ex-husband, was pregnant.

She informed the Police that her daughter said she was impregnated by the father who also took her to a quack medical practitioner to procure an abortion, explaining that the daughter had not ceased bleeding since the alleged abortion was carried out.

The Police Public Relations Officer, Abimbola Oyeyemi, who made this known in a release, stated that the Divisional Police Officer, Ewekoro division, Rotimi Jeje, a Superintendent of Police, detailed Policemen to go after the suspect and arrested him.

Abimbola; a Deputy Superintendent of Police, stated that the suspect has 17 children from different women and had admitted sleeping with his daughter several times before the pregnancy occurred; and proceeded to have the girl abort the pregnancy.

According to the Police Spokesman, the girl’s mother has separated from him years back and was living with her daughter until about six months ago when he forcefully took the girl away from his estranged wife.

“All efforts made by the mother to take custody of her daughter proved abortive. It was when the mother came to visit her daughter that she discovered the great atrocity committed by the suspect against her daughter,” Abimbola stated.