The police commissioner maintained that 3 arms, 375 ammunition, 1 vehicle and 3 motorcycles were recovered from the suspects. 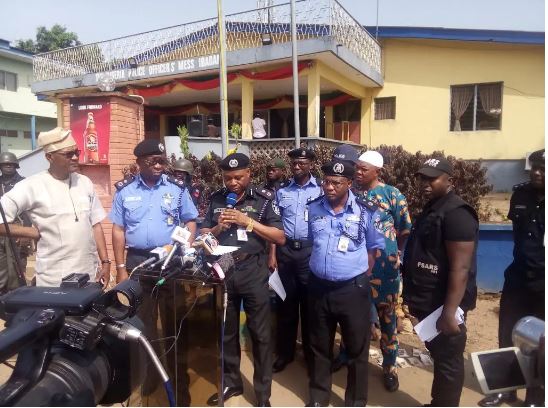 Commissioner of Police in Oyo State, Mr. Shina Olukolu has on Friday emphasised that the proscription of the Oyo state chapter of the National Union of Road Transport Workers (NURTW) has not been lifted.

Olukolu made this declaration while parading some suspected criminals arrested in connection with various forms of crimes, including kidnapping, robbery, rape and impersonation.

The Police commissioner while reacting to an attempt by some hoodlums who attempted to take over some motor parks in Ibadan recently, added that whoever attempt to disturb the peace of the state under the guise of being an NURTW member, will be dealt with according to the law.

He used the medium to warn members of the public against the use of fireworks; banger and knockouts.

“I also want to use this medium to remind and warn members of the public against the use of fireworks otherwise known as bangers, knockouts etc and other explosives as well as organising unauthorized street carnivals within the state especially during this Yuletide season.

“I also wish to state categorically that NURTW activities in Oyo state remained unrecognized and proscribed. Whoever attempts to disturb the peace and tranquility being enjoyed by the peace loving people of Oyo state under the guise of being an NURTW member will be apprehended and decisively dealt with according to the law.

Olukolu while speaking further maintained that two perspns, Usman Jiddah Umaru and Musa Abdullahi Jayum who attempted to kidnap another person in Igbo-Ora have been arrested, while one Oduola Gbenga has also been arrested for raping one Bose Jimoh and killing her 5-year old son, Fadeyi Opeyemi Ramadan.

Also paraded at a press briefing held at the command’s headquarters at Eleyele were three suspects; Omotayo Segun, Alausa Lekan and Damilola Samson who impersonated officers of the Economic and Financial Crimes Commission (EFCC) to defraud one Ijadunola Olajide.

Other criminals were arrested in connection with armed robbery and arms dealing.

The police commissioner maintained that 3 arms, 375 ammunition, 1 vehicle and 3 motorcycles were recovered from the suspects.