Kola Ologbondiyan, called on the two governors to allow the leadership of the party resolve the matter amicably. 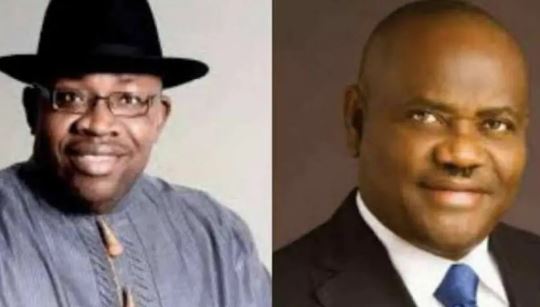 The national leadership of the Peoples Democratic Party (PDP) has urged Governors Nyesom Wike of Rivers State and Seriake Dickson of Bayelsa State to “sheathe their swords”.

The two governors over the weekend engaged in a verbal war over ownership of the Soku oil wells, which were being held by Bayelsa state until a court, in a ruling last week, declared Rivers state as the rightful owner of the wells.

DAILY POST had reported that Dickson on Sunday accused his Rivers State counterpart of promoting “wicked clandestine ethnic supremacist agenda” in the politics of Rivers.

According to the outgoing Governor, Wike was using the disputed oil wells between the two states as a subterfuge to create disunity and cover up his deliberate policy to under-develop Ijaw communities.

But the PDP, in a statement on Monday by its spokesman, Kola Ologbondiyan, called on the two governors to allow the leadership of the party resolve the matter amicably.

PDP stressed that the arguments between Wike and Dickson is ‘skin-deep and only borne out of their love and zeal for their respective states.’

The statement said: “The national leadership, having noted the issues, has activated the party’s internal reconciliation mechanism to settle the matter amicably.

“The PDP recognises that the tone of disagreements between the two respected governors was skin-deep and only borne out of their love and zeal for their respective states.

“The PDP leadership hereby urges both Governors Wike and Dickson, as eminent leaders and frontline stakeholders in our party, to sheathe their swords while the leadership harmoniously resolves the issue.

“We therefore assure all our leaders, critical stakeholders, members and supporters of our great party, particularly in Rivers and Bayelsa states, to remain calm and united, as the issue is already being resolved.

“The PDP restates that it remains one big indivisible family and will not allow anything to undermine its unity and focus especially at this trying time in the history of our nation.”