Two Muslim men dressed in Santa Claus costume have been spotted praying inside a mosque. 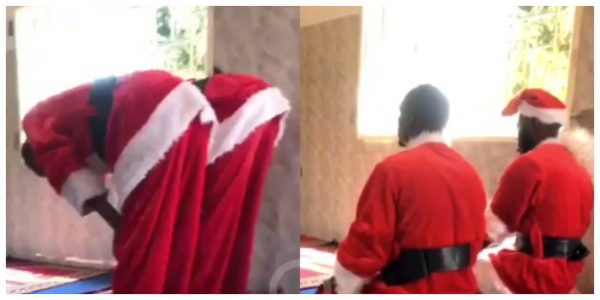 The Muslim men dressed in Santa costume praying inside mosque
Two Muslim men have been seen inside a mosque praying while being dressed in Santa costume.
The video has left tongues wagging. Some hailed it as a form of religious tolerance, while others condemned them for engaging in a celebration that has nothing to do with their religion.
In the video going viral already on social media, the men could be seen worshiping in the costume generally regarded as a practice emanated from the Christian religion.
See Video:

This is coming few days after a photo of a man surfaced on social media adorned in Santa Claus costume, while praying in an open Muslim praying ground.
Top Stories