Jonathan Visits Soldier Injured During Gunmen's Attack On His Residence


Jonathan, who visited the injured soldier wished him quick recovery, and commended the bravery of the security men on duty in his house. 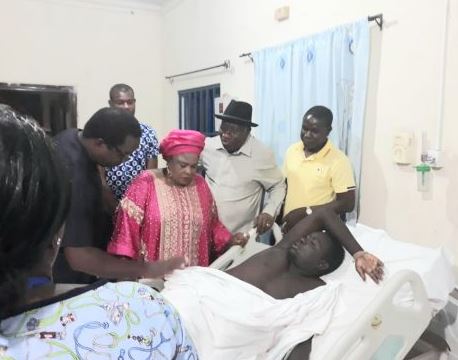 Jonathan visits soldier injured during gunmen’s attack on his residence

Former President Goodluck Jonathan and his wife, Patience, on Sunday visited Lance Corporal Umar Muttaka, one of the soldiers on guard at his residence in Otuoke, Bayelsa state who sustained injury when gunmen attacked his house last Tuesday.

Jonathan, who visited the injured soldier in an undisclosed hospital in Yenagoa, wished him quick recovery, and commended the bravery of the security men on duty in his house, who stood firm and fought for the interest and security of the nation.

Lance Corporal Muttaka is responding to treatment from the injuries he sustained during a gun duel with unknown assailants that stormed the country home of Dr. Jonathan in Otuoke on Christmas eve, our reporter gathered.

Security has since been beefed up in the residence of the former President both in Yenagoa and Otuoke since the incidence.