The hot topic on everyone's lip is the political crisis in Edo State APC. I'm confronted almost on a daily basis by concerned friends and colleagues with the question. 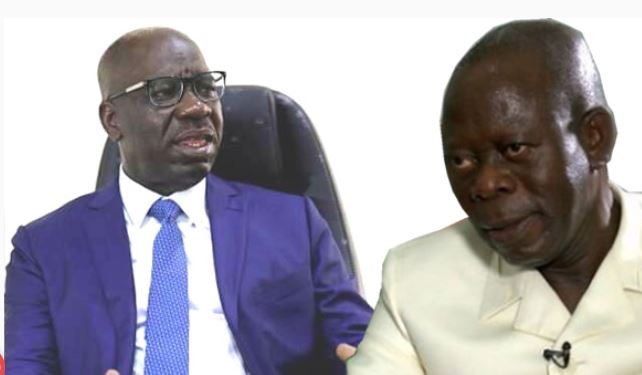 About seven months ago, I wrote an article on the political crisis in the Edo State chapter of the All Progressives Congress which has become intractable and deeply troubling. Why is it so difficult to resolve this matter? The point I made then was that as friends and brothers, Adams Oshiomhole who is the National Chairman of the APC and former governor of Edo State for two terms of eight years under the APC banner and Governor Godwin Obaseki should sit down and iron out their differences.

Unfortunately, this has not happened because, as it normally plays out, there are two groups that are loyal to their respective political gladiators with each group threatening fire and brimstone. The hot topic on everyone’s lip is the political crisis in Edo State APC. I’m confronted almost on a daily basis by concerned friends and colleagues with the question: What is going on in your state? This is a euphemism for the sad political situation in Edo State between Oshiomhole and Obaseki that has turned into a long running soap opera. Why did they throw their fellowship out of the window? Why did they drop the ball? Personally, I’m unhappy at the turn of events – what we have now is politics of bitterness, hatred and acrimony between two friends and associates. It did not have to end this way; it is public knowledge that Oshiomhole campaigned vigorously for Obaseki to win the election three years ago.

How do we comprehend a situation where the National Chairman of the APC is from Edo State; Obaseki is the only serving APC governor in the South-South and South East zones and that the 24 members of the state House of Assembly are all from the APC? And yet, we are having a crisis of this magnitude! The 24 members in the House are not united – 14 members loyal to Oshiomhole are exiled in Abuja and the remaining 10 are in Benin running the show. This ugly situation is not a good advertisement for Edo people because that is not who we are. But in politics, anything can happen!

I got the chance to weigh in on this matter again during the ‘Morning Show’ on Arise News, a live television programme, on November 5 with Kassim Afegbua, who was a former media adviser to Oshiomhole when he was the governor of Edo State. I re-stated the need for peace to reign because the crisis was giving Edo State a bad image both at home and abroad. We are peace-loving and law abiding people – we respect our elders and those in authority. I made the point too that Oshiomhole should allow Obaseki to serve the people of Edo State without let or hindrance. The allegation of most party members including those who made financial contributions to Obaseki’s campaign is that he used and dumped them. In the TV interview, I also appealed to Obaseki to build consensus within the party and engage all the key stakeholders who supported him to win the election for a win-win partnership. I added that even husbands and wives have their misunderstandings and disagreements but they should also have the presence of mind to reconcile.

There have been attempts at making peace by well-meaning Nigerians but the efforts have not yielded any fruitful results. Instead, both sides are digging in and Edo people are worried. Whatever agreement that both parties had has obviously evaporated. It is now evident that the politics of 2020 and the fight for relevance by Oshiomhole is a major cause of the political crisis. Oshiomhole denies being a godfather in Edo politics but nothing could be farther from the truth. His body language and overbearing attitude have betrayed his mission and his strong arm tactics to ‘capture’ Edo State at all cost in 2020 by using Edo People’s Movement – a pressure group and faction within the party- is already on full display and the intention is to hand over the APC ticket to Pastor Osagie Ize-Iyamu who re-joined the party recently.

This explains why the crisis is now going to be a fight to the finish because, from all indications, the battle line has been drawn by both sides – the fight is getting messier and messier by the day. The Edo State governorship election is due in 2020 and Obaseki who will be completing his first full term by November 2020 says he deserves a second term ticket because of his record of performance. Previously, Ize-Iyamu, a very influential politician, bridge-builder and activist in Edo State, was in the APC and then crossed over to the PDP. Now, he’s back to the APC at the instance of the EPM and Oshiomhole as the main challenger to Obaseki.

If this matter is not quickly resolved, I foresee political violence from two parallel primaries that would eventually hold in Edo State and the avoidable litigation that would follow.

I understand why Edo people, especially the leaders of thought and professional groups, are not speaking up on this matter even if they are outraged by the egregious behaviour that is on display by the political class. In one moment, you will find politicians fighting and tearing themselves apart and the next time, they are friends again – you can never be sure where they stand and this is why most stakeholders prefer to sit on the fence and speak from behind the curtains. The law of self-preservation, as I have found out, is the primary motivation of politicians. Only a very few members of the political class care about principles and the common good. I’m not surprised Ize-Iyamu is back to the APC because politicians are all the same but he should note that if Oshiomhole can fall out with Obaseki, then it can happen to him again. Recall that Ize-Iyamu left the APC for the PDP when Oshiomhole was governor because he complained of “hypocrisy” within the party.

Why is Oshiomhole, the National Chairman of the APC, unable to put his house in order? What does he really want from Obaseki? Instead of managing the crisis in his party in Edo State where he is a former governor, Oshiomhole is stoking the fire and creating a crisis that is likely to consume the party in the state. Elsewhere, I had advised Oshiomhole to play the role of a statesman and leader by bringing everyone to the table and settle their differences. In such a scenario, there should be no winners and losers and the spirit of reconciliation should prevail and motivate all to finding a lasting solution to the crisis.

Should Edo State be reduced to a theatre of political war and bloodshed for personal ambition? Is this crisis part of the political calculation for 2023? I think Oshiomhole should at this time sit back, take a deep breath and reflect on how he became governor of Edo State because it appears he has forgotten. If he can call to mind the events in very recent memory, this needless dog fight – now famously known as Abuja versus Benin fight – where he is clearly the aggressor, would be unnecessary. However, if he has forgotten, my sources tell me that Obaseki, Chief Lucky Igbinedion, former governor of Edo State under the banner of the Peoples Democratic Party (PDP);Pastor Osagie Ize-Iyamu, Captain Hosa Okunbor and Chief Tom Ikimi – prominent Edo indigenes — will remind him.

Oshiomhole is still very unhappy over the botched Benin City APC rally – a very big bruise to his ego which he scored as a victory for the Obaseki/Shaibu group and thereafter blamed the Inspector General of Police – to welcome Ize-Iyamu and others into the APC recently. By the way, how was such a rally supposed to hold when Obaseki, the APC leader in the state, travelled with the President, Major General Muhammadu Buhari (retd.) to Egypt for a peace conference?

I call on all men and women of conscience and goodwill to speak up on this matter now or forever hold their peace. I also want to specially appeal to Buhari to urgently intervene in this crisis as the leader of the APC and the father of the nation in the interest of fair play and for peace to reign in Edo State. May God Almighty bless Nigeria.

Ehi Braimah, a marketing strategist, is based in Lagos