A pastor has confessed to slaughtering a final year student of the Lagos State University, Favour Oladele. 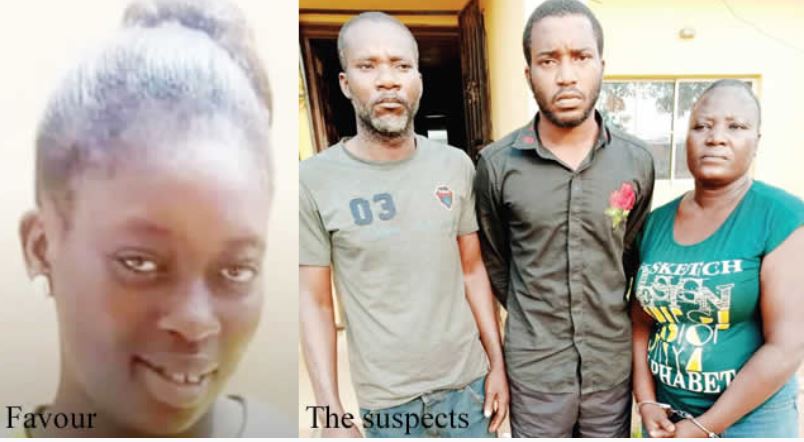 Favour Oladele was slaughtered and eaten by her killers
A self-acclaimed pastor of Cherubim and Seraphim, Solution chapel in Osun state, Segun Philips has opened up on how he slaughtered a final year student of the Lagos State University, Favour Oladele, after her boyfriend Owolabi Adeeko reporterly smashed her head with a pestle.
According to Punch, the pastor confessed that he was the one who slaughtered and removed the breasts, heart and other vital organs from Favour’s body.
Philips while speaking in an exclusive interview with Punch at the police headquarters, Eleweran, Abeokuta, on Monday, revealed that the organs removed were used to prepare concoction for Owolabi and his mother.
He, however, said the concoction was prepared with human parts without the knowledge of Owolabi’s mother.
When asked whether it was a lie that he slaughtered the girl, Philip who looked remorseful said, “It is true I slaughtered Favour with a knife.
“I was the one that removed her heart, breasts, and other vital organs so we can use it for rituals.
“But, I was not the one that smashed her head with a pestle. Owolabi did it .”
He, however, exonerated Owolabi’s mother, saying, although we deceived Owolabi’s mother that we would do something different.
“She was not aware we used human parts in the concoction I gave her.
“I prepared the ritual for them because I am broke and I needed money. I demanded N250,000 but was paid N210,000.
“I was called by God, but I think I have lost the call because of what I did.”
The 23-year-old Owolabi had reportedly connived with the 42-year-old self-acclaimed pastor to kill Favour.
Owolabi who was arrested by policemen at the Ikoyi-Ile area of Osun State was said to have confessed that he sought the help of Philip for ritual money which he used his girlfriend for.
The Police Public Relations Officer in Ogun State, Abimbola Oyeyemi, in his statement had said, “The deceased was reported to have left home to an unknown destination since the 8th of December 2019 and has not been seen since then, hence, she was reported missing by her parents at Mowe Police Station.”
Top Stories