Man of God and founder of INRI Evangelical Spiritual Church, Primate Ayodele has released his prophecies for 2020. 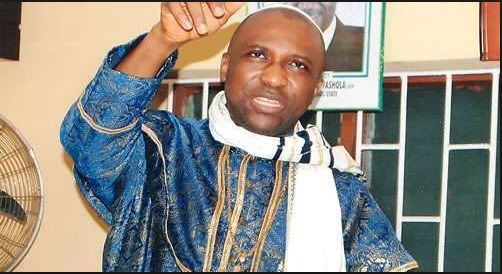 Primate Babatunde Elijah Ayodele
Primate Babatunde Elijah Ayodele, the founder of INRI Evangelical Spiritual Church, Oke-Afa, Ejigbo Lagos, has released his prophecies for year 2020.
The man of God released the prophecies while speaking some days ago at his annual fest.
In his prophecies, he said he foresees death, referendum, clashes between the ethnic groups, death of prominent banker, and that Nigeria sits on a timebomb that may explode.
Read the complete prophecies below:
“NIGERIA: Nigerians in the Diaspora will witness more troubles. I foresee incessant killings in the country as rioting will be on the increase. Nigeria 2020 needs to pray so well because I foresee so many things happening in the country. The country will face serious economy challenges.
I foresee that Budget 2020 will not drive the need of the people. The country needs prayers for guidance and God’s divine protection. Government should look for ways of working things out.
Let us pray against unexpected bomb explosion in Nigeria.
Let us pray against the death of a professor, a judge, a onetime civilian governor, a military officer, a minister and a business tycoon.
Let us pray against the death of a prominent banker.
The government should take steps to tackle the level of crime. The prices of gas will increase as there will be new electric stove.

“There will be issues and clashes between Yoruba and Hausa, Igbo and Hausa.
I foresee deportation of Nigerians in some countries and some Nigerians will be deported within Nigeria. Government will caution people that try to criticize their policy.
People will not be able to express their desire.
Democracy will cause a lot of problems and will break Nigeria. I foresee future referendum coming. A lot of things will happen in Nigeria. I foresee protest and counter protest against the government. Let the country pray against confusion. Nigeria will face a lot of challenges as they will embark on certain steps to normalize and checkmate its security challenges.
“Despite all this, there will still be security challenges in major parts of the country.
Let’s pray for God to protect
Federal Ministries that their office will not be involved in any fire incident.
The following states: Enugu, Kogi, Lagos, Ondo, Ekiti should be careful of erosion and flood and some parts of the north that have not experienced it before.
There will be too much population in the country. Nigeria is still sitting on a time bomb that may explode. The country should pray for peace and unity in the nation. I foresee a new flag in the world i.e. another country will emerge.
Some country will come out of another country.
“Let us pray to rebuke the death of a present and former Minister, former governor, and Former president in Nigeria.
The government of President Buhari will expose some former governors who are corrupt.
The government will make lots of efforts to move the country. APC will rise up against the government. Some government agencies will be scrapped due to internal inefficiencies. Lagos (EKO) Electric Distribution Company will face problems and also in Rivers, Kwara, Edo, Ebonyi, Kano and Cross Rivers.
I foresee that the 2023 election will pose serious tension as the Northern part will want to continue to be in power at all cost. They will do so many things so as to ensure they remain in power. The Yoruba clamouring to become the next president of the country should seek the face of God before they embark on any journey.
“The Igbo will not be recognized in 2023. The 2023 election will be so tough and challenging. The geo-political zones who have sold their right are still going to regret it because anybody that talks will be arrested or oppose what the government are doing will face so many threats. I foresee some people will oppose the decision of the government.
The Federal Inland Revenue Services (FIRS) should be committed into prayers and they will introduce a new tax system into the country.
Let us pray against calamity in the country.
There will be environmental pollution. Stock Exchange will experience changes in its leadership position. Some company license will be seized.
“I foresee unexpected explosions and fire outbreak in Nigeria.
Some Federal Ministers must be careful because some will face unexpected challenges in discharging their duties properly.
Let us pray against troubles in our security system.
Baby factories will be detected. The government will embark on new methods of sanctifying the state in order to make it free and cool the security of the country. Pensioners will demonstrate. Some state will not be able to pay their pensioners. Pensioners will go on strike.
Fraud will be detected in the Pension Board. Ghost workers will be detected by the Federal government.

“Let us watch against unexpected explosion and killings in Abuja. Herdsmen will come in various dimensions. Some state will work on cattle rearers which will not work as expected.
There will be attack on herdsmen. The president must pray to rebuke troubles. Nigeria will be concerned about the security challenges confronting the country. Nigeria will make security dominant in the country. Let us pray so that curfew will not be declared in some states and local government and let’s rebuke cases of emergencies in any of the sectors in the country.
I foresee the Villa being changed from its present location in the nearest future. I also foresee a new Presidential Villa being built.
“Let us pray to rebuke death and cases of fire in the Villa. Let us also be careful and watchful because of so many things that will be happening in the villa. Let us pray against attack and threat on the Villa. Let’s pray so that none of the presidential convoy will be attacked.
The government should be vigilant. President Buhari should take a rest in the month of April, May, August and September 2020 and he should watch his policies. I foresee drama in the Villa.
Let us pray for our governments so that none of them will be attacked. Some Ministers will be queried by the President. Some of the hidden agendas of the Ministers will be exposed.
Apart from this, Nigeria will experience what they have not being experiencing before. I foresee earthquake, landslide and earth tremor in Nigeria.
“Farmers will be assisted and encouraged by borrowing them money but the money will not be accounted for. Government will distribute fertilizers to the farmers so as to enhance their farm crops and fake fertilizers will be given also. I foresee the South-West will start producing food.
“Let us pray to rebuke attack in some neighbouring countries. Government will raise tax on tricycle riders in Lagos. The license method of C of O will be changed.
Tinubu will be betrayed. Osinbajo and Buhari will have problems as there will be moves to remove him from office even as I foresee the cabals working against Tinubu’s plan and they will be threat to question Tinubu.
Osinbajo must be prayerful because he will face counter challenges before the end of his tenure. Malabo oil scam will still rise. Some present and past politicians will be accused. The country needs lots of prayers as the Lord has blessed the country so much.
Top Stories