Troops' Withdrawal May Begin February In Zamfara, Katsina, Others


Some of the states were among the worst-hit by herdsmen and farmers' clashes, banditry, kidnapping and internal conflicts since 2015. 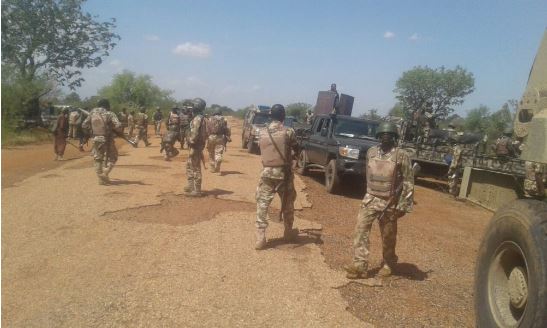 Barring any last-minute changes, there are strong indications that the Federal Government may begin the planned gradual withdrawal of soldiers from some states in February, investigations by Saturday PUNCH have revealed.

Top military sources told Saturday PUNCH that in the first round of the exercise, the withdrawal would take place in the north-western states of Zamfara, Katsina, Jigawa and some parts of Kaduna.

Others are some states in the North-Central region, including Plateau, Nasarawa, Benue, some parts of Niger and a north-eastern state, Taraba.

Some of the states were among the worst-hit by herdsmen and farmers’ clashes, banditry, kidnapping and internal conflicts since 2015.

The sources noted that the reason for the withdrawal was because relative calm had returned to the zones, especially the Middle Belt, and that troops deployed on special operations in some of the states might be trimmed.

The scheduled commencement of the exercise is in disregard of the appeals by some state governors to the Federal Government not to withdraw troops from their states.

The Chief of Naval Staff, Vice-Admiral Ibok-Ete Ibas, had at the end of a security council meeting, presided over by the President, Major General Muhammadu Buhari (retd.), on Monday, told State House correspondents that the planned withdrawal in the first quarter of the year was to allow the military to focus on its primary duty of defending the nation against external aggression and to respond to new security challenges.

One of the new challenges is said to be the growing threats posed by the Islamic State West Africa Province, now working in collaboration with Boko Haram insurgents.

ISWAP had on Christmas Day executed 11 hostages, 10 of whom were Christians, to avenge the death of their leaders, Abu bakr al-Baghdadi and Abul-Hasan Al-Muhajir, in Iraq and Syria, respectively, during a US military operation

The naval chief, who declined to name the states or the geopolitical zones that would be affected, explained that the withdrawal would be done after an assessment of the situation on the ground, to determine areas where peace had returned to enable civil authorities to assume full control of security of lives and property in such places.

He said the council decided that in place of the military, the Nigeria Police Force, which has the primary responsibility of providing internal security, would assume its duties fully in such areas and that they would be supported by officials of the Nigeria Security and Civil Defence Corps.

But, reacting to the planned withdrawal, some governors, including Samuel Ortom of Benue State; Darius Ishaku of Taraba State and Bello Matawalle of Zamfara State, said in an interview with The PUNCH on Monday shortly after the security council meeting that they still needed troops in their states.

Ortom, who spoke through his Chief Press Secretary, Terver Akase, appealed for an extension of the presence of the troops to allow internally displaced persons return to their ancestral homes.

In an interview with The PUNCH, he had said, “Our position is an appeal to Mr President. He had done Benue well by deploying Operation Whirl Stroke to tame the menace of herdsmen at the time Benue needed intervention. We appeal to the President to extend the life-span of the troops at least by a year to enable our people at the IDPs camps to resettle in their ancestral homes.”

Also, Zamfara State Commissioner for Security and Home Affairs, Alhaji Abubakar Dauran, who spoke on behalf of the governor, said the police alone could not address insecurity in the country, adding that the Operation ‘Hadarin Daji’ had contributed to the restoration of peace in many parts of the state.

“Although we are able to reduce banditry in our state through dialogue and reconciliation, we still want the military to be in our midst in case of any unforeseen circumstance,” he added.

On his part, the Taraba governor, who spoke through his aide, Dan Abu, told The PUNCH that the Federal Government should reconsider the decision. He said the security in the state should not be left to the police alone.

He added, “Their presence has been very helpful. It has calmed down the crisis and we have been able to achieve relative peace as a result of their presence. For that reason, we are very grateful. But we believe that the withdrawal is premature because although there is relative peace now, there is a need for that peace to be sustained and their presence will go a long way in helping the sustenance of peace that has been achieved so far.”

But on further enquiry on the states that would be affected, some military commanders told Saturday PUNCH that the three arms of the military; Army, Air Force and Navy, had already been notified of the plan to withdraw and redeploy some of their troops from February.

One of the commanders noted that the North-West region, hitherto troubled by bandits and armed herdsmen, would be mostly affected by the troop withdrawal as it was believed that peace had returned to the region and dialogue with state governments had resolved the banditry crisis.

The commander said, “The military authorities do not take orders from state governments. The states are channeling their plea to the wrong quarters. If the President and Commander-in-Chief has directed the military to withdraw troops, he’s the only one who can reverse that decision. However, we are going on with that plan and it may likely take off in February.

“It’s all for the good of the country. The troops have more pressing needs to attend to in other regions and they cannot be deployed to where peace had been restored. The North-West region, for example, had been relatively calm since the middle of last year till now and the banditry and kidnapping crises had gone down considerably.

“Nobody is saying the criminals have all been arrested, but the police and other security agencies can now continue from where the military stopped.”

Another commander from the North-West region said the withdrawal of troops was also to cut military expenses and save the country from financing troops and providing logistics in areas where calm had already been restored.

The source added, “The withdrawal of troops has to go on because the Federal Government wants and has to save cost in this New Year. So, it is both a military and economic strategy. The states cannot stop it; only the President can. But apart from the North-East, there is hardly any region where the police and other security agencies cannot handle the situation.”

Also, a reliable military source from the North-Central noted that the troops deployed to combat the formerly raging farmers-herders’ crisis and Fulani militias’ attacks might be reduced significantly, as the military authorities sought to hand over ‘the complete coordination’ to the police and the state governments.

The source said, “The North-Central zone had been under a fierce season of bloody herdsmen and farmers’ clashes as well as Fulani militia attacks. But that is gradually going down presently. The military authorities know that the troops on some operations have to be reduced to save operational and logistics costs.

“Also, there have been clashes between the army and other law enforcement agents, particularly the police, and there is need to avert such clashes like the one in Ibi, Taraba State, in August 2019. So, one of the strategies arrived at was the reduction of troops in these states and the giving of more visibility to the police.”

Meanwhile, a top military source in one of the affected north-western states confirmed to one of our correspondents on Friday that from information made available to them after the December security meeting, police would henceforth be more involved in tackling banditry in the region.

The source cited last Sunday’s night attack by bandits in Jibia where the police successfully repelled the bandits and drove them away.

The source said, “Presently, we have not received official signals to withdraw our participation in the current efforts to end banditry in the state and in the neighbouring Zamfara, but we understand there will henceforth be more of police participation in tackling the banditry problem.

“The Nigeria Air Force also has its combat aircraft and officers stationed in Katsina from where they launch aerial attacks on locations where there are reported attacks by bandits.

“But, presently, there is the Inspector-General of police ‘Operation Puff Adder’ and the team has its members spread in different locations in the state, especially within the eight frontline local government areas where the majority of the bandits operate from the forest. So, the police will handle it from there.”