A photo has emerged of the ABU lecturer who was brutally murdered by some bandits in Katsina state. 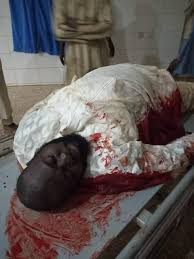 We reported earlier that the killing spree by armed bandits in Katsina State continued on Monday night with the murder of an Ahmadu Bello University (ABU), Zaria, lecturer, Umar Isah, at Malumfashi.

Isah, who was until his death was a lecturer at the ABU School of Basic and Remedial Studies (SBRS), Funtua, was killed when the bandits raided several communities at Malumfashi.

Now, a photo of his body (seen above) has emerged after the incident.

It will be recalled that following distress calls, according to a witness, the police intervened and were said to have engaged the bandits in a gun duel that lasted several hours.

“The gunmen actually tried to abduct the victim but he resisted and due to the pressure from the police, the bandits eventually shot Isah and fled,” the witness said.

The resurgence in activities of hoodlums has attracted the attention of civil society groups with a report indicating that Katsina State has recorded a total of 26 armed banditry and kidnapping attacks within the last 30 days in various parts of the state.

In the report dated January 6, 2020, the coalition of civil society organisations lamented what it described as the deteriorating state of insecurity in Katsina State, weeks after the government said it had “successful dialogue and negotiation” with bandits operating in the area.

“The dialogue with the bandits initiated in good faith became efficient for a while because it was neither professional nor built on any defined framework,” the report signed by the group’s Chairman, Muhammad Bashir Usman Ruwangidiya, said.

According to the coalition, “the federal and state governments have failed woefully in securing the lives and property of the people of Katsina State.”