Over 30,000 PDP Members Defect To APC In Zamfara


The defectors were loyalists of Alhaji Ibrahim-Shehu Bakauye, former PDP governorship aspirant, who recently defected to the All Progressives Congress. 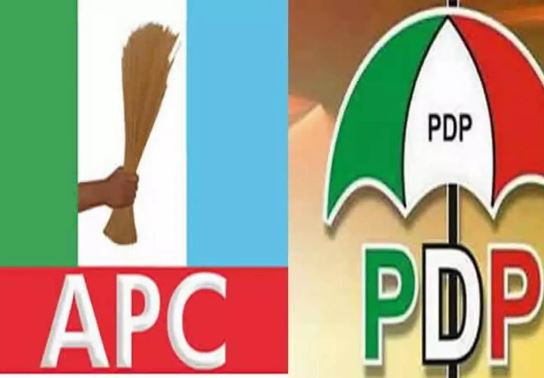 Over 30,000 members of the Peoples Democratic Party (PDP) have defected to the All Progressives Congress (APC) in Zamfara State.

News Agency of Nigeria (NAN) reports that the defectors were loyalists of Alhaji Ibrahim-Shehu Bakauye, former PDP governorship aspirant, who recently defected to the All Progressives Congress (APC) after his meeting with the former governor of the state, Alhaji Abdul’aziz Yari.

NAN further reports that Bakauye, a former legislator representing Gusau/Tsafe federal constituency from 2011 to 2015, was a PDP governorship aspirant in the 2019 general elections but lost to Governor Bello Matawalle in the primary.

The defectors led by former PDP factional Chairman in the state, Nasiru Milo and members from 14 local government areas of the state, announced their decision at the APC state party secretariat, Gusau on Wednesday.

Milo said, “we resolved to join our leader to APC considering various developments the party brought at both state and National level.

“We are satisfied with Bakauye’s decision to join the party with large number of supporters in the state.

“We are happy today, we are leaving the party with minority supporters to the strongest political party in Zamfara and Nigeria in general.

“Over the years, we suffered from injustice and disunity in PDP, today we have joined a party with good leadership style that respects the rule of law”, Milo said.

“On behalf of the over 30,000 Bakauye supporters in the state, we are announcing our defection to APC today.

“We will be loyal to APC leadership in the state and cooperate with all stakeholders for the development of the party”, he added.

Responding, the state APC Chairman, Alhaji Lawal Liman described Bakauye’s defection and his supporters to APC as a great achievement for the party in the state.

Liman said “we are happy with this development inspite of the fact that our party is not in control of the leadership of the state.

“This is a strong indication that the APC is the strongest political party in the state”, he said.

Liman urged party members to be united and avoid differences and discrimination for the development of the party.

He cautioned the party supporters against anti-party activities, saying that the party has zero tolerance for such act.

“The APC National Executive Council meeting, which held in Abuja resolved that all its members must participate in party activities from ward up to national level.

“Therefore, I am calling on our members to abide by this directive”, Liman added.