Olaleye said Labour has also resolved to participate in a global rally against war slated for January 25, in view of the vulnerability of workers in war period. 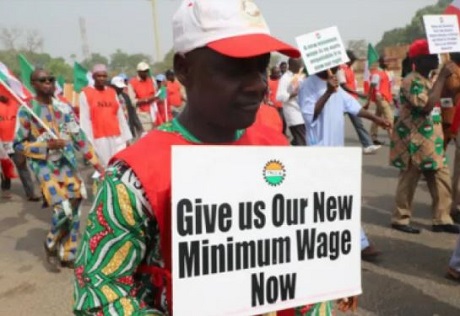 States yet to implement the payment of the N30,000 new minimum wage or conclude talks on the consequential adjustment of salaries for senior civil servants by January 31 will face the wrath of Labour.

Organised Labour said it would not be able to guarantee industrial peace and harmony in such states at the expiration of the ultimatum.

Trade Union Congress (TUC) President Quadri Olaleye told reporters on Thursday at the end of the National Executive Council (NEC) meeting that the union had directed states to begin mobilisation.

He said governors should be held responsible for whatever happened at month end.

According to him, two of the states – Lagos and Kaduna commenced the implementation before the curtain dropped on the year.

He warned that Labour might declare trade dispute with three states – Cross River, Kogi and Taraba – for failing to initiate talks with workers’ representatives on the implementation of the new wage.

The remaining 23 states opened talks with unions on minimum wage implementation and consequential adjustments of salaries of senior workers before December 31, last year.

But Olaleye said: “The Congress advises all state governments who have not complied with the implementation and immediate payment of the N30, 000.00 new National Minimum Wage to commence negotiations and implementation on or before 31st January, 2020, otherwise the state government should be responsible for the consequences of their failure. “State councils have been directed to commence mobilisation of their members immediately.

“We want to assure them this is not an empty threat. Labour will shut down any states that have not yet started the implementation or negotiation.”

On the spate of insecurity in the country, Olaleye called on the Federal Government to intensify efforts towards wiping out killings, kidnapping, armed banditry and insurgency.

He said states should be supported and encouraged to boost security.

“NEC-in-session resolves to participate in a global rally against war, slated for January 25, 2020, in view of the vulnerability of workers in war period,” the TUC leader explained.

Olaleye said Labour has also resolved to participate in a global rally against war slated for January 25, in view of the vulnerability of workers in war period.

The union also condemns all forms of casualisation and slave labour in the country.

Olaleye said the Congress will in the year engage any employer that violates the right of workers to unionise and have permanent employment.