The hunters also called on the initiators to organize a parley where all the personnel would meet to identify themselves. 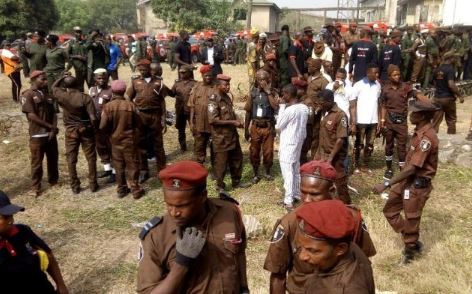 Members of the hunters’ association rejected the proposed N13,500 monthly payment for personnel of the outfit.

The hunters also called on the initiators to organize a parley where all the personnel would meet to identify themselves.

But reacting, the Ondo State Government said the six South-West states have not agreed on remuneration for the personnel.

This came on a day the Nigerian Bar Association, NBA, in Ado Ekiti, threw its weight behind the outfit, saying the South-West governors acted in consonance with the spirit and letters of the 1999 constitution.

Speaking through its National President, Oba Nureni Anabi, the hunters who would be active members of Amotekun said the motive for setting up the outfit would be counter-productive if the personnel didn’t know themselves.

Anabi said the six states, which formed the outfit should reconsider the meager salary of N13,500 to be paid to the members of the outfit.

Anabi said: “We are happy at the proactive move of our governors. They have shown good leadership qualities by launching the Amotekun
security outfit. Now, we can sleep with our two eyes closed.

“We, the Soludero Hunters Association, will do our best to ensure that the outfit remains.
“Having launched the outfit, I want a forum where all of us that would work in the outfit would meet ourselves.

“This is very important because as of now, we don’t know ourselves and this is very dangerous when we talk of security. This will enable us to familiarize and know one another.

“I heard that the Oyo State government alone purchased 33 patrol vans, while other states donated 20 vehicles.”

Frowning at the proposed remuneration, the Agbekoya Farmers’ Association, called for an upward review for personnel.

Its President-General, Chief Kamorudeen Okikiola, who commended the governors for the launch of the outfit, said the proposed remuneration was poor.

Okikiola said: “The Operation Amotekun is a welcome initiative by the governors but they do not have a concrete plan as regards recruitment of personnel. What kind of people will be recruited? Are they going to recruit those without any security experience? How much will they be paid monthly? You cannot pay someone who wants to confront armed criminals N13,500. Let us tell ourselves the truth, the Police cannot venture into the forests to confront these criminals. If the governors are serious, they should start with N50, 000 as monthly pay. This will motivate those who will be part of the outfit.

“If the governors do not want casualities, they (governors) should recruit personnel who have a background in security and can confront the armed criminals.”

States yet to decide on salary — Ondo gov

But making clarifications, Special Adviser to the Ondo State Governor on Security Matters, Alhaji Jimoh Dojumo, said the six South-West states are yet to agree on the remuneration for the personnel, saying “we are meeting today again in Ibadan (Oyo State) and that is one of the agenda that would be jointly agreed on.

“All those to be employed should be rest assured that the states would remunerate them handsomely for their services. We are yet to decide on the amount to pay the personnel. All that you read on social media are not true.

“After our meeting in Ibadan today, we will jointly agree on a uniform amount to pay the personnel including the hunters, Oodua Peoples Congress, OPC, and Agbekoya that are ready to lay down their lives to ensure that our people in the zone sleep with their two eyes closed.

“But at the same time, I want to appeal to them to consider what they are about to do as service to humanity and not make the remuneration as their priority.

“The security of the lives and property of the people in the region is of paramount importance to the six governors, hence, this concept should be applauded.”

Meanwhile, the NBA in Ado Ekiti has backed the new outfit, saying the governors acted in consonance with the spirit and letters of the 1999 constitution.

The NBA Chairman, Ado Ekiti chapter, Mr. Samuel Falade, in a telephone conversation argued that though Sections 214 and 215 of the 1999 Constitution mandated the Police as the agency responsible for the protection of lives and property to provide security, that this doesn’t preclude the governors from taking further measures to reinforce protection for the citizens.

Falade said: “However, Chapter 2, Section 14 (2b) gives mandate and rights to president and governors to provide security across the country and in their respective states, that the primary duty of government is to protect lives and properties.

“I see no reason people should criticise the body or entertain fears, because the governors had spoken about the modus operandi of Amotekun, which was that they would work alongside the Police, NSCDC and Army.

“We have had several cases of kidnapping, killings and ritual cases among other crimes in the region in the last few years and there must be proactive action to complement conventional security architecture to rise to these sordid situations.

“The essence of Amotekun is to rise to the present insecurity in the South-West and governors as Chief Security Officers can design ways to protect their citizens as long as such step is in line with the law, which is the case with Amotekun.”

He described the noise about Amotekun as unwarranted and unnecessary, saying it has a precedent in the history of the country.

“Let me emphasize that Amotekun has precedent. We have the Civilian Joint Task Force, CJTF, in the North-East to help combat Boko Haram, so Amotekun has both constitutional and judicial backing for the protection of lives and property.

“As usual, once anyone is arrested, he will be immediately handed over to the police. With this, it’s a welcome development and it is a right step in the right direction.

“Any citizen or governor in the South-West ,who refuses to support this laudable and great idea is several years behind time,” he said.

Amotekun not a military wing of OPC —Aare Adams

Similarly, the Aare Ona Kakanfo of Yorubaland, Iba Gani Adams, yesterday, said the outfit should not be seen as the military arm of OPC.

In a communiqué by the Aare-in-Council at the end of its meeting, yesterday, Iba Adams said: “Contrary to fears in certain quarters, the outfit will complement the security architecture of the region, and the nation at large, as well as boost the security of lives and property in the land.”

He dispelled insinuation that the South West security network is a military wing of the OPC, saying “the long history of OPC vis-à-vis its contribution to regional security is not in doubt.”

The congress stressed that it “will leverage on its rich experience, to support any initiative that will help secure Yoruba land and make it a no-go area to career criminals and their tribes.”