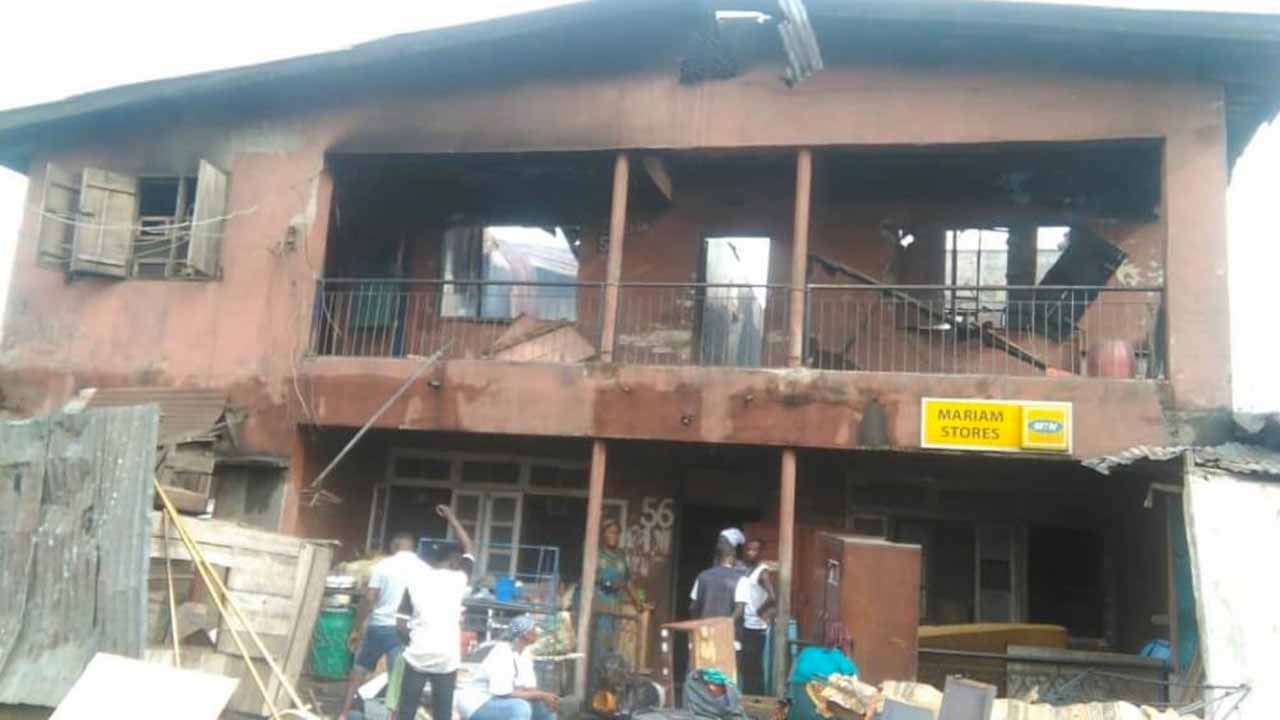 The building that went up in flames in Oshodi, Lagos on Sunday night

Just as the harmattan season is making its hurried exit, a harvest of fire incidents spread across some cities from the weekend and yesterday, leaving in its trail anguish and destruction of properties. A fire broke out at No. 56, Oshodi Road in Oshodi-Isolo local government area of Lagos State on Sunday night displacing the occupants of a single storey building.

According to an eyewitness, the fire started at about 10:00p.m. and lasted into the early hours of yesterday caused by a candlelight which burned out in one of the rooms in the building. “Thankfully, the spirited efforts of residents and community leaders who rushed to put off the fire from consuming the whole building ensured no life was lost though property worth millions of naira was lost to the fire by tenants in the upstairs section of the building.”

It would be recalled that recently, the local government authority advised residents to take precautionary steps to avoid fire disaster, and the on the dangers of igniting combustible elements in this fire-prone dry season.

In Delta State, the building housing a new generation church in Asaba, Charismatic Renewal Ministries Inc. (CRM), aka Transformation Faith Centre, on Sunday went up in flames during church service, destroying a section of the church complex, located at No. 35, Biosa Amantu Street, off Jesus Saves road, Oshimili South local government area of the state.

It was gathered yesterday that the strange fire broke out in one of the rooms in the church complex where a phone was plugged and kept on top of a mattress. According to an eyewitness, the situation would have been grave but for the swift intervention of the state’s fire service.

The fire engulfed the administrative section of the church destroying some documents as the surging heat created commotion in the church hall, causing bewildered worshippers to scamper for safety during the incident. Also at the weekend, fire outbreak destroyed 39 shops and furniture worth over N21 million at a furniture market in Abuja. Some of the affected furniture makers at the market in Kugbo, said they were called at about 12midnight on Sunday by the guards on duty and informed about the incident.

Chairman of the furniture market, Austin Onuh, who is also a victim, said the incident occurred on Saturday night when all the shop owners had closed for the day. He regretted that most of the furniture burnt were given to them on contract by their customers.“We are yet to determine the cause of the inferno but furniture worth over N21 million naira have been burnt by the fire. Some of us here just returned from Christmas and new year celebrations, and started work that our customers gave us, but this morning we only came to see ashes,” he said.

Onuh appealed to FCT Administration, spirited individuals and corporate organisations to support them. Timothy Eze, one of the affected furniture makers, said he has lost not less than N 8 million worth of furniture in his shop.“Apart from the furniture, industrial machine, generating sets with several working equipment worth millions were also burnt,” he said. According to him, despite efforts by the people around the area and the fire fighters, they were not able to salvage the situation.

There was also palpable fear in Imo State as part of the state Zoological Garden located on Nekede road, Owerri, was gutted by fire. According to a witness, the fire, which started at about 9:00a.m. on Saturday from the forested area close to the den of lions housed by the zoo, raged till about 1:00p.m. before the state fire service arrived and extinguished it.

The General Manager of the zoo, Francis Abioye, who confirmed the incident, told newsmen that he was yet to ascertain if endangered species in the zoo were affected. He disclosed, unfortunately, that plant species, which provided food and shelter to some of the animals were destroyed in the inferno.

“We cannot ascertain the level of damage at the zoo but I can tell you that some species of plant were burnt down,” Abioye said. The zoo manager explained that the fire “emanated from the buffer area of the zoo, which gives protection to the conservative areas where some of the dangerous animals such as the lions are caged.

Meanwhile, the body of the mother of a priest of Okigwe Catholic Diocese, Rev. Fr. Alex Onyemata narrowly escaped being burnt as the ambulance conveying it to the morgue burst into flames following a leaking fuel tank. The incident, which happened few poles to the Mercy Mortuary, Umulogho Obowo, Imo State, saw the ambulance, a Toyota Sienna, completely burnt.

According to eyewitnesses, the ambulance left the woman’s compound from Dikenta Avutu Obowo with the body at about 2:00p.m. and was gutted by fire while in motion along Owerri-Umuahia Expressway at the weekend.However, the woman’s body was rescued by the deceased family members, who had accompanied it to the mortuary before the fire totally engulfed the vehicle.

One of the witnesses, who simply identified himself as Prince, told newsmen that “the ambulance was on motion when fire started dropping from the fuel tank. On noticing it, the driver immediately stopped and a crowd of people came out to assist him stop the fire with fire extinguishers, buckets of water mixed with detergent, buckets of sand and green leaves, all to no avail.“As the flames became intense, the bereaved family forced open the ambulance boot and brought down the body wrapped in clothes in a stretcher before the vehicle exploded and burnt to ashes.”The bereaved, The Guardian gathered, were forced to carry the body in the stretcher and walked it to the mortuary to deposit the body.