At least four Nigerian navy personnel have been allegedly killed by sea pirates in Ondo state. 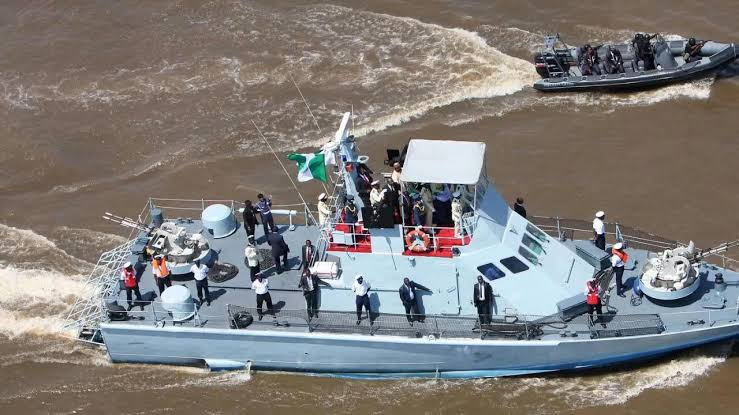 Four men of the Nigerian Navy have been killed by pirates
A tragic incident has claimed the lives of four Nigerian Navy personnel in Gagira, a suburb of Awoye coastal community in Ilaje Local Government Area of Ondo State over the weekend.
The naval ratings were reportedly killed during a gunfire exchange with sea pirates which ensued between them and the pirates following the kidnap of three foreigners.
Naval personnel have already been deployed to the community in search of the sea pirates and the military rifles of the deceased ratings.
A curfew was imposed on the community by Commanding Officer, Forward Operating Base in Igbokoda, Commodore Danjuma Ndanusa who insisted that the four military rifles and seven magazines stolen during the gun duel must be produced.
He also disclosed that one of the arrested sea pirates said the rifles were in the community.
Ndanusa said;
“We intimated them on what is at stake. It is like sleeping on a time bomb. I told all the Baales (village heads) to get all their youths and speak with them.
“That was why we did a total search and we found four telephones and one walkie-talkie belonging to the foreigners. I made this known to the four Baales from the community
“We also made a search on the boat they came with from Bayelsa State; we were able to recover empty magazines from guns on the floor of their boat. We place a curfew on the four communities and on the activities on the waterway by putting pressure on them to produce the arms because it is a threat to the innocent people in the community.”
Top Stories