Social media commentators and other influencers have been reacting to the Supreme Court judgement in Imo State in connection with the 'powerful' prophecy of Father Mbaka. 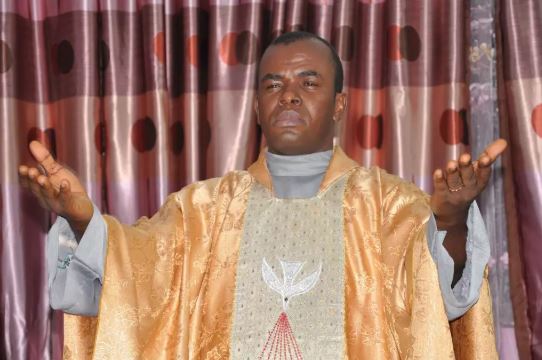 Yesterday must have been the longest night for the Imo State Governor, Emeka Ihedioha who was abruptly sacked by the Supreme Court with his opponent, Hope Uzodinma of the All Progressives Congress installed as the rightful winner of the gubernatorial election in the state.

The seven-man panel led by Chief Justice of Nigeria, Tanko Muhammad, agreed that results in 388 polling units were unlawfully excluded during the collation of the final governorship election result in Imo State. The apex court noted that the result from the 388 polling units indicated that Uzodinma polled majority of the lawful vote and ought to have been declared the winner of the election by the electoral body.

Meanwhile, the Charismatic Roman Catholic Priest and Spiritual Director of Adoration Ministry, Enugu, Nigeria (Amen), Fr Ejike Mbaka during the New Year had declared Uzodinma was going to win the legal tussle at the Apex Court. His prophecy was widely frowned at from several quarters in and outside the state. In Nigeria, religious clerics always play huge roles in the political process. They either help to woo supporters for candidates, give spiritual assistance and also release prophecies about election outcomes which end up being negative at times.

Excerpts from his January 1 prophecy read:

“Lift your candles as I bless Hope Uzodinma; and I empower him to, spiritually, to take over. How, I do not know.

“Please, if you heard that there would be a new government in Imo and you don’t like the message; if I say Hope, you can say hopeless but do not fight me" he said.

Exactly 13 days later, Ihedioha who has spent much of his few months as the governor of Imo State undoing the works of his old political foe and predecessor, Senator Rochas Okorocha was sacked. Rather than give Father Mbaka credit as a credible Christian cleric who might be hearing from God directly, many feel he might have gotten intelligence report about how the Supreme Court judgement will play out. 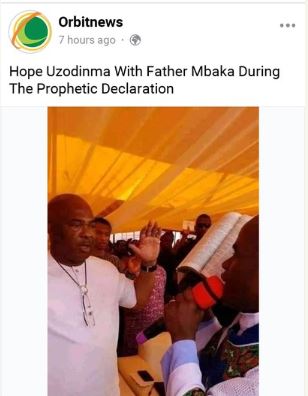 Social media users later dug out a picture he took with Uzodinma in which they seemed to be exchanging banters. This isn't the first time Father Mbaka is delving into the murky waters of politics. He somehow finds his voice when elections are close like he did in the year 2015 when he predicted the victory of President Muhammadu Buhari at the polls. This doesn't make his revelations generally accurate; his prophecy about the former Governor of Gombe Ibrahim Dankwambo being president failed woefully.

Social media commentators and other influencers have been reacting to the Supreme Court judgement in Imo State in connection with the 'powerful' prophecy of Father Mbaka.

The Senior Pastor of Awaiting The Second Coming Of Jesus Christ, Adewale Giwa has said that he was not surprised to see the fulfilment of the prediction by Father Mbaka that Uzodinma would be declared Imo State governor by the Supreme Court. Giwa described Mbaka as a partisan prophet, adding that he must have got the hint of the judgement before speaking.

He said, “When a partisan prophet speaks, we surely know who gives him the hint. This is a concluded deal among them.

“Is it not the same prophet who enters Aso Rock, wining and dining with the president? We know where they all belong. Check my record, I stand by the truth at all times and the truth will eventually prevail in Nigeria" he said.

Activist and serial protester, Deji Adeyanju also condemned the Supreme Court ruling and he sarcastically referred to Father Mbaka as the 'real man of God'.

“Mbaka, the real man of God" 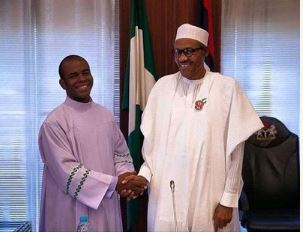 However, a fiery critic of Christian clerics, Daddy Freeze while reacting, revealed how he felt Father Mbaka was able to get his prophecy right. According to him, God is not a fortune teller.

Freeze just like Senior Pastor Adewale Giwa said that Mbaka who is a close ally of President Buhari might have gotten classified information about the judgement which was why he gave the prophecy.

“Lol at those who think what Father Mbaka said was a prophecy. God is not a fortune teller. Wake up guys. Someone on top of things could have squealed but you love myths don’t you? 2 Timothy 4:4:. New Living Translation. They will reject the truth and chase after myths.”

On Twitter, a survey of opinions of people on the Supreme Court verdict showed the level of distrust Nigerians have always had for the judiciary especially when it comes to political issues. Conspiracy theories believe that the 'Federal Might' could have been introduced in a well-orchestrated clandestine plan to install Uzodinma through the court. According to their postulations, Father Mbaka was only an actor who acted a script that was handed to him by powerful forces known as the Oga At The Top' in the local lingo. They allegedly made him give that prophecy to prepare the minds of the people against what was ahead and to douse any tension in the political space.

Since he is a revered figure in a highly religious society, people might embrace the Supreme Court verdict wholeheartedly so as not to go against the will of God. All these views have been made without any hard evidence.

Meanwhile, a section of social media users has been celebrating Father Mbaka due to the accuracy of his prophecy. A Two-time Commissioner in Imo state and a chieftain of the APC, Dr Vitalis Ajumbe criticized attackers of Father Mbaka, urging them to tender an apology to him.

"People who called Rev. Mbaka names as a false prophet should now apologise to him publicly. Mbaka prophesied it and it has come to past." part of his statements read.

Father Mbaka might have just gathered the momentum to make more political prophecies in the future. This time around, the entire country might listen due to his impressive track record.