Many people have perished after a commercial bus caught fire along the Ore-Ijebu Ode-Sagamu Road. 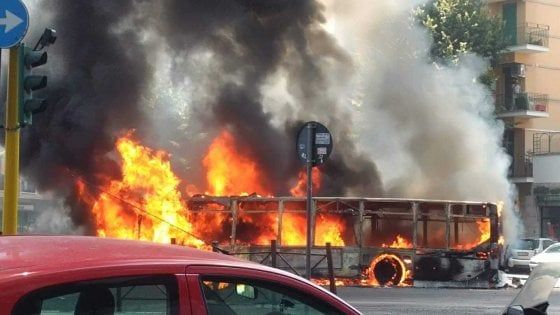 Punch Metro reports that no fewer than nine persons were reportedly burnt to death yesterday when a commercial bus caught fire at Ijebu Ife along the Ore-Ijebu Ode-Sagamu Road in Ogun State.

In a statement, Oladele said the accident occurred at about 3:20 pm following a fire outbreak involving a Toyota Hiace commercial bus which was on motion with 19 passengers.

According to statement: “The FRSC rescue team on receipt of the information rushed to the venue of the crash scene and commenced rescue operations.

“While some of the passengers were rescued from the raging inferno, some other passengers as of the time of this report are still trapped in the burning vehicle.

“A total of 10 people comprising six males adults and four female adults have been rescued from the inferno with three other people made up of two male adults and one female adult sustained seriously injures with some suffering first degree burnt.”

Oladele added that the injured victims were rescued and rushed to a nearby hospital in Ijebu-Ode for immediate medical attention.