Ronaldinho Reveals What He Did To Messi At Barcelona


Ronaldinho has now revealed how he spoke to then-manager Frank Rijkaard to bring Messi on board. 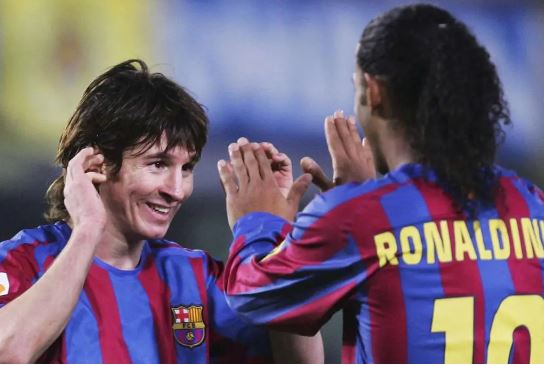 Ronaldinho has detailed how he was involved in Lionel Messi’s development at Barcelona.

The Brazilian star arrived at Camp Nou in 2003 and was at the club when a teenage Messi began working his way into the Catalans’ first-team.

Ronaldinho, speaking with Panenka magazine, has now revealed how he spoke to then manager Frank Rijkaard to bring Messi on board.

“When I arrived at Barcelona, there was already talk of a kid [Messi] who stood out.

“Then we were friends; we started playing together and we got on very well. He arrived being different to all the others, and we spoke with [Frank] Rijkaard so that he came to train with us – it was all very fast.

“I was lucky enough to give him the pass for his first goal.

“Over time, it’s very nice to see someone who starts out so close [to you] and then conquers the world.

“We were always very close. We learned things, he taught me Spanish and I taught him Portuguese, but with the ball we understood each other perfectly.

“I’d be left amazed by how calm he is. That’s something I love about him; he never gets into trouble, he’s always with his family and those closest to him.

“Leo has everything, he didn’t need anything from me,” Ronaldinho said.