Insecurity: Self Defence Is Justifiable - Akande


The former Osun State Governor made this known while speaking with newsmen during his 81st birthday celebration held at his ancestral home in Ila-orangun. 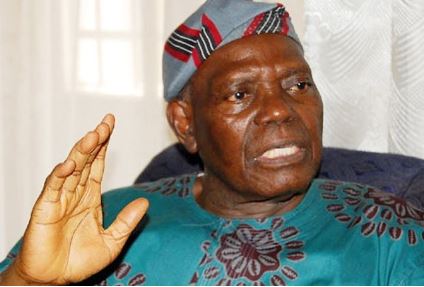 Former Acting Chairman of the All Progressives Congress, APC, Chief Bisi Akande, on Thursday, said there was nothing wrong in people putting mechanism for self defence in place to secure life and property.

He said: “Self defence is the first law of nature, there is nothing wrong in securing one’s abode through different means, including engaging the service of private guards to protect life and property.”

The former Osun State Governor made this known while speaking with newsmen during his 81st birthday celebration held at his ancestral home in Ila-orangun.

Akande, however, declined to make a categorical statement on the issue of ‘Operation Amotekun, saying such issue required appropriate legal understanding and framework.

He described the present pattern of politics in Nigeria as money-driven, maintaining that most of the current Nigerian politicians had no other job aside politics.

Akande added that good governance and accountability could be a mirage when people go into politics without stable source of livelihood.

“The new generation of politicians are driven by material things, whereas in our days, we consider service to the people first before any other thing. You can’t be successful in politics without stable economic condition,” he said.

He, however, took a swipe at those clamouring for local government autonomy, arguing that such agitation negated the tenets and principles of good federalism.

Akande maintained that the concept of federalism recognised only the central government and federating units and intrinsically gives no room for local governments.