A leader of Afenifere has been arrested and detained at the police station for allegedly obstructing VP's convoy. 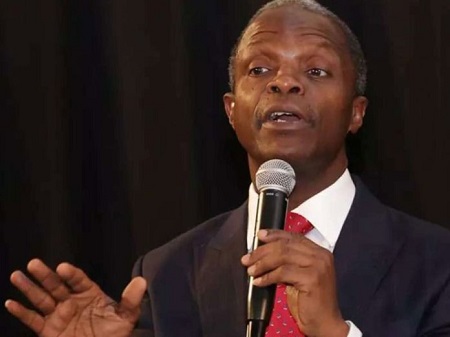 Yemi Osinbajo
The National Organising Secretary of Afenifere, Abagun Kole Omololu, has expressed shock after being arrested and detained by one of the police officers on the entourage of the Vice President, Yemi Osinbajo.
Omololu said he was arrested in Lagos State and detained at Onikan Police Station.
In a message sent to The PUNCH by the Afenifere leader, he wrote: “I have just been arrested by ACP Oludotun Odubona on the entourage of the VP Osinbajo, claiming (that) I did not park well for the convoy, in front of Nigerian National Petroleum Corporation, Ikoyi.
“Currently, I am in detention at Onikan Police Station, Awolowo Road, Ikoyi, Lagos.”
When contacted about 9.17 pm, Omololu told Punch that he had been released.
He said, “It is just an act of overzealousness. I have been released. No condition was attached to my release. Senior aides of the vice president, including the ADC and Chief Security Officer, have called me.
The Afenifere leader also said the police officer almost slapped him during the altercation.
“He accused me of struggling with the convoy, which was not the case. I was only trying to move away. He came to meet me where I parked, raining curses on me.
“He nearly slapped me. Despite all my explanations that I am an elderly man, he insisted that I was arrested and taken to the police station. I told him that I respect the VP and I won’t obstruct his convoy. He only embarrassed his boss. I know his boss will never do that.”
Top Stories