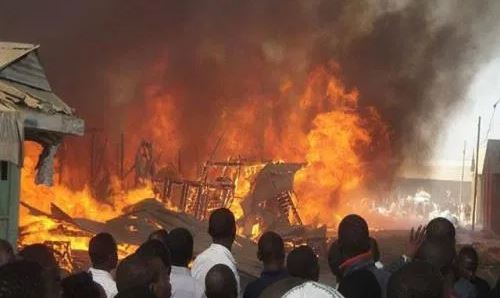 Over 200 buildings are believed to have been gutted by fire following twin pipeline explosions at the Fagba and Abule Egba areas of Lagos.

The fire, which started this evening, was alleged to have been caused by vandals who were attempting to siphon fuel from an NNPC pipeline. According to eye witnesses, the fire has spread to u turn, Katagwa and Ilepo areas and is said to still be spreading.

Another fire is also said to be raging at Fagba. No word on casualties has so far been reported. An eye witness, simply identified as Charles, said: “My wife alerted me about the explosion. She said the fire was serious.

“I have called fire fighters, they told me that they were already on their way. They said someone had already alerted them about the fire.”

Another eyewitness, who gave his name as Paul said : “There’s panic everywhere. Some people ran out of their apartments stark naked.”

LASEMA Response Teams and other first Responders have been mobilized to both incident sites.

While the Agency’s Dolphin Squad is at the Ilepo Bus Stop Abule Egba fire Incident, the Incident Commander, DG/CEO LASEMA-Dr. Oke-Osanyintolu is presently at the Fagba Pipeline fire with the Tiger Squad from Command Control Centre, he is equally on his way to the other pipe line explosion Ekoro, Pipe Line Bus Stop.