Nigerians calls EFCC out for arresting 89 people and labelling them as fraudsters in Ibadan nightclub. 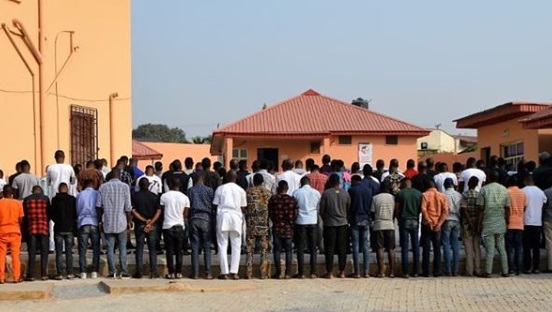 The Economic and Financial Crimes Commission has come under criticism from a large section of Nigerians for raiding Club 360 in Ibadan last Friday and arresting 89 youths in the process.

The EFCC had posted pictures of the suspects on its Twitter and Facebook pages, on Monday morning, alleging that all the 89 youths in the club were alleged internet fraudsters otherwise known as ‘Yahoo boys’.

The EFCC wrote, “The Ibadan zonal office of EFCC has arrested 89 suspected internet fraudsters at the popular Club 360 located on the Akala Expressway, Oluyole Extension in Ibadan, the Oyo State capital.

“In preparation for the late-night operation which took place over the weekend, officers of the commission had carried out series of discreet surveillance on the nature of activities going on in the nightclub which according to intelligence gathered, the said club was notorious for harbouring yahoo-yahoo boys.”

Most respondents wondered how the EFCC was sure that all 89 persons arrested at the club were fraudsters.

They wondered why the EFCC had to arrest the club goers and start searching through their phones.

According to some, who claimed to be eyewitnesses, the EFCC operatives also arrested the bartenders as well as customers of the hotel located inside the same compound as the club.

@Animasaun_a tweeted, “Anytime I’m in Ibadan, I always go to this spot to hang out because it is very close to my parents’ house. Had it been that I was in Ibadan over the weekend, I would have been part of these guys and I’m not a Yahoo boy. You have also killed someone’s business. EFCC, this is wrong.”

@Ditoman2 also tweeted, “I do go there as well. Assuming I was there, they’ll tag me a Yahoo boy by now. Nigeria is a zoo.”

@TheOgbonnna advised the EFCC to stop acting like the Shariah Police, Hisbah, by raiding night clubs and branding everyone who goes there a criminal.

“It is wrong for the EFCC to run down a legitimately run business all in the name of a raid. It is wrong. EFCC is not Hisbah,” he tweeted.

@Olikoko61 also tweeted, “It is very wrong. I was at that place last week with a friend and his girlfriend from the United States. This habit of busting public places is barbaric. Gather your Intel and go for the exact person.”

On Facebook, followers of the EFCC did not spare the anti-graft agency for what they termed crude methods of investigations.

Simon Kilex wrote, “This is how you people go around harassing innocent people in this country. Nigerian security agencies are still living in the past. Imagine security personnel just arresting someone simply because he or she goes for a party. Complete nonsense.”

Emmanuel Collins, who commended the commission for its fight against corruption, wondered how possible it was for everyone at a party could be a fraudster.

“EFCC, I commend your good work and I urge the agency to keep the flag flying. However, I am at a loss as to how 89 Yahoo boys converged on a night club for them to be arrested,” he wrote.

“It is media trials like this that made Naira Marley popular and famous in the eyes of his followers. EFCC, there is a need to change your tactics,” Prince Francis Chidi Chilaka wrote.