A First Class graduate has told of how he sponsored his way through the university by patching tyres. 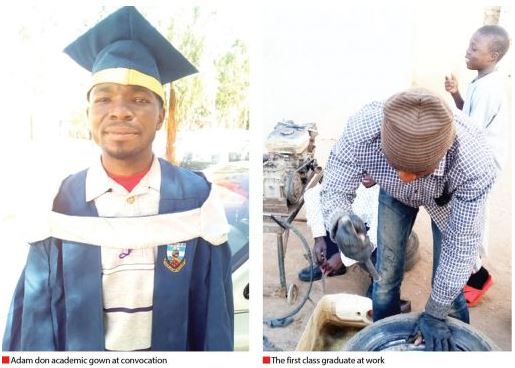 Isah Adam Hussaini, 30 years old, earns a living through vulcanising in Jos, the Plateau State capital. In this interview with Daily Trust Saturday, he explained how he sponsored his education from secondary school to the University of Jos through vulcanising and graduated with first class honours in Statistics.

You have engaged in vulcanising for quite some time, how did you start?

I inherited the occupation from my parent. Virtually all my siblings are feeding on it. While growing up I saw my uncle doing it and decided to learn from him.

At what point did you start practising?

It was after I was trained by uncle. I was with him at ‘Yan Taya before he relocated to NEPA, along Zaria road. When I realised that the place was far, I decided to start practising here on my own since I have the skills. This place is close to my secondary school.

What are the successes you have recorded in this occupation?

By the will of the Almighty Allah, I was able to pay my school fees from junior secondary school to the University of Jos, where I read Statistics and bagged first class honors. I graduated last year. Since I could fend for myself, I asked my parents to look after my younger ones.

Presently, I am doing the National Youth Service Corps (NYSC) programme.  I was initially posted to Imo State, but due to some issues I was redeployed to Jos and I am now serving in the Federal College of Horticulture, where I teach. I always do my occupation after school hours.

Through this occupation, I was also able to acquire a piece of land at Tilden Fulani town, close to Jos. By the will of Allah, I will erect the structure through vulcanising.

What are the challenges you have encountered as a vulcaniser?

They had to do with my studies. At times if I went to school I would not have the time to do anything here. Sometimes it would take a whole week, but by the grace of Allah, within two days I would realise my school expenses for the subsequent week.

What’s your advice for fellow youths on the importance of skills acquisition?

Honestly, we are in a time when you cannot count on educational certificates, so I advise my fellow youths to acquire vocational skills.

There was a time someone brought me a job from the college where I teach. After I served him I noticed that he was looking at me keenly. When I asked why he was staring at me, he said he was surprised at my level of humility.

The man wondered how someone with such qualification would engage in this occupation under the scorching sun. But I told him how I sponsored my education through this trade.

Nobody should look down on any occupation. Instead of staying idle and roaming the streets, youths should acquire skills, as well as do menial jobs to cater for themselves.

Do you think government should empower small scale occupations like yours?

With the way things are going, I think government at all levels should devise means of empowering small and medium scale occupations in this country. Should government give support to small and medium enterprises, some of the youths who engage in crime would be encouraged to change their minds. Such gesture will also help in reducing the spate of unemployment in the country, which is the birthplace of vices.