Famous actor, John Boyega has been caught on camera surprising his parents with a London house. 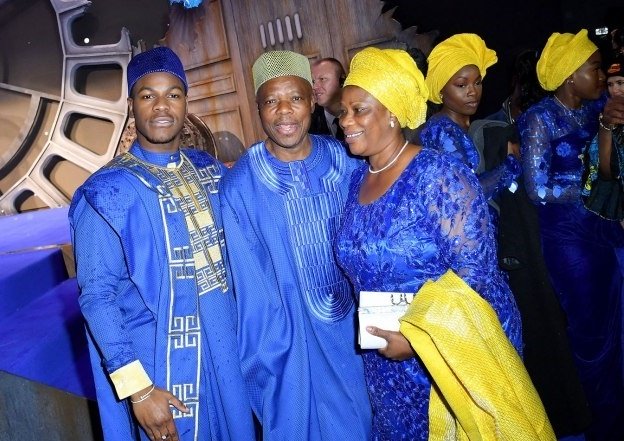 John Boyega and his parents

John Boyega, a Nigerian-British actor, has shared a video clip which captured the moment he surprised his parents with a new house in London, United Kingdom, some years back.

The 27-year-old ‘Star Wars’ actor took to his Instagram page on Monday to give his nearly two million followers a glimpse as to how his parents reacted after announcing the gift.

The award-winning movie star said such gesture makes his many years of hard work memorable.

“A few years ago this happened! Moments like these make all the hard work worth it,” he wrote alongside the nearly 3-minute footage.

In the video, Boyega appeared to have invited his parents to the building, claiming it was part of an interview for a new show of his.

His parents could be seen alighting from a bus and heading into the apartment.

They were however, stunned when the talented actor announced the apartment was theirs, noting it was an appreciation for their many years of sacrifices for him.

“I just bought my mom and dad a house, I have always wanted to do that,” he said.

“On behalf of myself, I would like to say thank you for everything you have done. I have decided to do a secret project, for a few months. and I am here to tell you there is no interview, that was a lie.

“This is your house that I am presenting to you. This is your new house. It belongs to you. So we wanted to present the house to you today. So, a round of applause. We have been planning this for four to five months.

“It’s not bad, it is a small token but I just thought it is the best that you live in an environment and place where you are happy. And you have space and privacy. Congratulations. It your prayers that has got this. It is your prayers because the skill and ability that I have received has been from your prayers and I cannot ignore what God has used my parents to do in my life.

“This is just my physical appreciation, honestly from the bottom of my heart. Thank you so, so much for everything you have done.”

Apparently surprised, the two had broken into tears of joy, with his dad wiping off his face with an handkerchief intermittently.

Born to the Nigerian parents on March 17, 1992 in London, Boyega has enjoyed a stellar movie career, winning several awards including BAFTA ‘Rising Star Award’ in 2016.