The young Brazilian striker helped the Gunners salvage a point with a fine goal at Stamford Bridge. 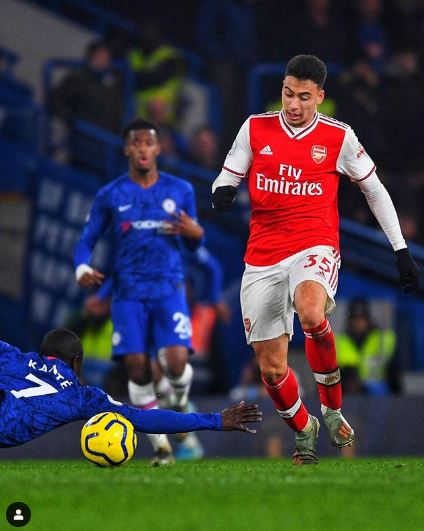 Martinelli raced from well inside his own half to score on the counter just after the hour at Stamford Bridge, cancelling out Jorginho's first-half penalty for Chelsea.

Arsenal defender David Luiz had been sent off for committing the foul on Tammy Abraham that sent Jorginho to the spot but the Gunners snatched a point even after falling behind for a second time.

Arsenal boss Arteta highlighted his players' character and made special mention of Martinelli's maturity, the 18-year-old having continually impressed since arriving from his native Brazil in the close season.

"To play in this stadium the way he has done with 10 men and against Azpilicueta, who in my opinion is one of the best defenders in the league, and he was going against him every single time, you need courage to do that," Arteta said.

"Then his energy. I wanted to take him off a few times because he looked knackered, he was cramping and next minute he's sprinting 60 yards again.
"Not just him. I think Laca [Alexandre Lacazette] is playing at a really good level, even though he's not scoring, and Nico [Nicolas Pepe] as well, and everybody that's coming in. They are fighting really hard in training to try to convince us to play more.

Arteta was forced to deploy Granit Xhaka in defence after losing David Luiz and praised the former captain for overcoming the "varied" state of mind that led him to contemplate a transfer earlier this term.

"I tried to convince him that this was the right place for him to stay, that I wanted to give him the opportunity to try to enjoy playing football again and everything I ask him to do, every training session he is willing to do it," the Gunners boss said.