A mutant goat has been attracting people in India and is now being worshipped as a god. 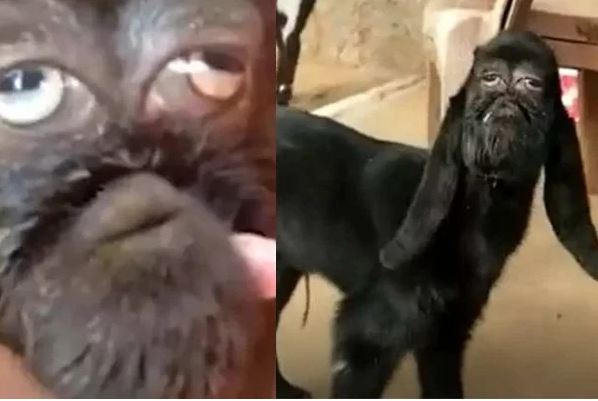 The mutant goat with human-like face
A mutant goat has become a celebrity and is worshipped in India because of its oddly human-like face.
According to Dailymail, the young animal, which has human-like eyes and mouth, was born recently in Nimodia village on the outskirts of Jaipur, Rajasthan.
Owner Mukeshji Prajapap posted a short video of the black goat with a strange face inside his hut earlier this week.
The goat is seen stumbling around the room and wagging its short tail in the video.
In other snaps it is also seen glaring at the camera and looking away when Mr Prajapap reaches out to touch its scalp.
It may have suffered the facial deformity due to a rare congenital defect called Cyclopia, which usually causes a single eye to form on the forehead.
Goats may be considered a holy animal in India, although Hinduism names the cow, monkey, snake, elephant and tiger among its five holiest animals.
However, goats are named in part of the Vedas, Hindu religious texts, as an animal of importance.
A goat with the facial structure of a human was born in India in 2017, India Today reports. Its nose resembled a human's and it also had a delicate nose and lips.
And in the same year a 'cyclops kid' with just a single eye was born in the village of Assam, India.
The animal had a single eye, which can happen during fetal development when the brain fails to divide into two parts, reports Live Science.
The same animal had only one complete ear, a lack of a true nose, eyelids and eyelashes, and unusually small and missing teeth.
Watch below:
Top Stories