A plane used in fighting Australia wildfire has crashed leaving all passengers on board dead. 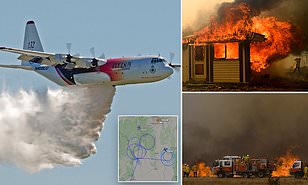 The water bomber plane crashed while fighting wildfire
A water tanker plane battling infernos in Australia has crashed in New South Wales.
Three crew members said to be inside the plane have died.
The New South Wales Rural Fire Service confirmed the deaths on social media this morning.
Every member on board the C-130 Hercules aerial water tanker died in the crash after the aircraft lost contact in the Snowy Monaro region of the Australian state, two hours south of the capital, Canberra.
The three crew members have not been identified but officials said they were US residents.
Earlier the fire service said a number of helicopters were searching for the crashed plane.
In a post on its Facebook page this morning, the fire service said: ‘The NSW RFS is in mourning following the deaths of three experienced aviation crewmembers, killed during firefighting operations in southern NSW.
‘The C130 Large Air Tanker crashed this afternoon. There were no survivors. ‘Our thoughts are with their families and fellow crewmembers.’
The fire service said the US crew had been contracted to Australia to help fight the bushfires during the country’s worst season on record. More than 80 blazes are still raging across NSW amid a return of high temperatures and strong winds. It was unclear what had had caused the plane to crash, said Commissioner Shane Fitzsimmons. ‘Initial reports are that there was a large fireball associated with the impact of the plane as it hit the ground,’ he said.
Meanwhile, Canberra Airport was closed on Thursday owing to nearby blazes, and residents south of Australia’s capital were told to seek shelter.
The fire started on Wednesday but strong winds and high temperatures caused conditions in Canberra to deteriorate.
A second fire near the airport that started on Thursday morning is at the ‘watch and act’ level. ‘Arrivals and departures are affected due to aviation firefighting operations,’ the airport authority said in a tweet
Top Stories