A 75-year-old man was believed to be dead by many of his friends after his ex-wife did something truly shocking. 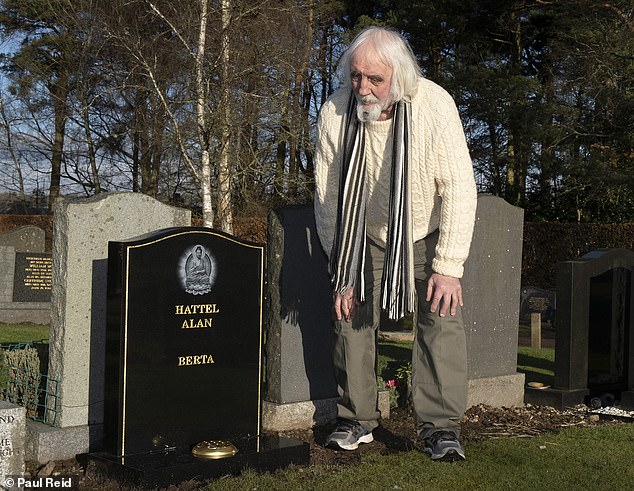 A retired welder whose phone hasn't rung for months because friends think he is dead realised the error after discovering his own gravestone erected by his ex-wife.

'People think that I'm dead,' said Alan Hattel, 75, from Tayside, Scotland. 'My phone hasn't rung for three or four months. I've been confused by it all but now I know why nobody has been calling.

'I don't even want to be buried - I plan to be cremated.'

Mr Hattel declared: 'I'm still alive', as he stood beside his headstone and said reports of his death had been greatly exaggerated.

Mr Hattel said he had realised something was not right because his social life has been deathly quiet for the past three or four months.

He said he now knows the reason his phone has not been ringing is because people have been under the impression he was dead.

Mr Hattel said the erection of his headstone in Newmonthill Cemetery in Forfar was done without his knowledge and the whole affair was 'like something out of Only Fools and Horses'.

Now he wants to set the record straight and let people know he is very much alive.

He has also spoken to Angus Council officials and plans to put a cover over the headstone which bears his name. He said:

He has put the blame for the headstone at the door of his ex-wife, from whom he separated some 26 years ago.

The 75-year-old, who spent 37 years as a welder before retiring, claimed his ex-wife has bought the plot of land and put up the headstone with the intention of them being buried together.

Both their names appear on the headstone.

'I've never, ever said I wanted to be buried alongside my ex-wife,' said Mr Hattel, who has two grown-up children with his former spouse.

'We've been separated 26 years and there's no animosity but I'm struggling to take it all in.

'To find out you have a gravestone in a cemetery while you are still alive isn't something that happens every day.'

A family member at Mrs Hattel's home said: 'This is a family matter being dealt with privately.'

Angus Council said it was unable to discuss the issue or disclose any information about who purchased the plot as it was a confidential matter.