Lukman's call came on the heels of the multiple internal crisis rocking the party in states across the country. 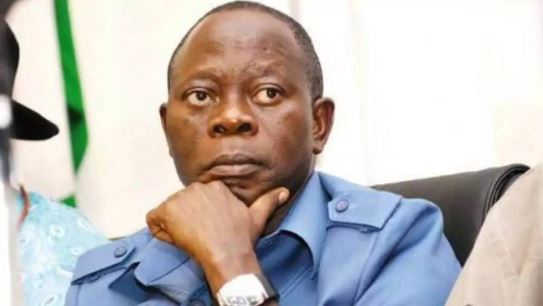 A Federal Capital Territory, FCT High Court, in Jabi, on Thursday declined the Ex-Parte Application filed by the National Vice Chairman, North East of the ruling All Progressives Congress APC, Comrade Mustapha Salihu, a factional Chairman of the APC in Edo state, Anselm Ojezua and others, seeking to remove the National Chairman of the party, Comrade Adams Oshiomhole from office.

Lukman, had told Oshiomhole to convene a National Executive Council (NEC) meeting of the party or resign without further ado.

Lukman’s call came on the heels of the multiple internal crisis rocking the party in states across the country.

However, the court on Thursday frustrated the move to oust Oshiomhole, as it refused to grant the Ex-Parte motion filed by Salihu, Ojezua and others

Counsel to Oshiomhole and APC, Damian D. Dodo (SAN), noted that they had not been served and drew the Court’s attention to the Memorandum of Appearance and Undertaking to Accept Service of processes on behalf of the 1st & 2nd Defendants.

Responding, the Presiding Judge, Justice Danlami Senchi stopped the move and ordered that the Defendants be put on notice to ensure a fair hearing in the matter.

Justice Senchi ruled that it will hear all parties instead of granting the ex-parte application to remove Oshiomhole as the National Chairman of the APC as requested by the Plaintiffs.

The matter was adjourned to 18th February 2020 for hearing of the Claimants’ application.